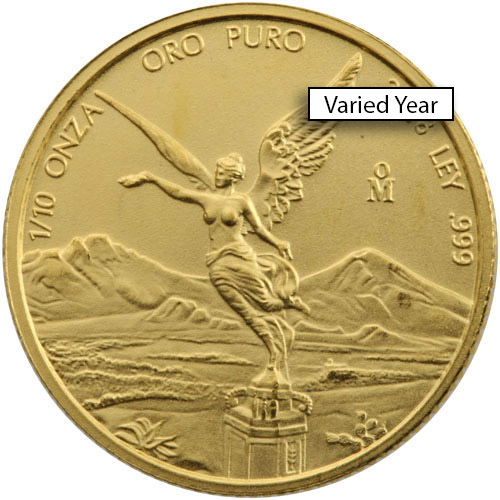 The Libertad coin series is the official silver and gold collection of the Mexican Mint. Introduced in gold in 1981 and silver in 1982, these coins are immensely popular among both investors and collectors. The popularity of the products is enhanced by the extremely low mintage figures the Mexican Mint permits for the coins. Right now, 1/10 oz Gold Mexican Libertad Coins are available to purchase online at Silver.com.

Each 1/10 oz Gold Mexican Libertad Coin in this offering is available to you from a varied year of issue. The coins in this listing have a possible year of issue mark ranging from 1991-1994, 2000, or 2002-present. Silver.com does not guarantee any specific year of issue with your purchase. Our warehouse team selects a coin for you based on availability when your specific order is fulfilled for shipping.

On the obverse of all Gold Mexican Libertad Coins are a series of intricate and historic designs for the Mexican people. First and foremost is the image of Winged Victory, or Winged Victoria. Based upon the ancient Roman religion’s goddess of victory, Victoria, her figure was inspirational to the Mexican people during their decade-long revolutionary war with Spain.

The other images on this side of the coin are subtle in the background, but significant nonetheless. Visible from Mexico City are the twin volcanic peaks of Popocatepetl and Iztaccihuatl. Ancient Aztec lovers, the duo died in a Romeo-and-Juliet story. One was a princess and the other a warrior. When the king sent his daughter’s lover to war, she was told he died in battle. Distressed, she died of a broken heart. When he returned alive, he too succumbed to death via heartbreak at his beloved’s death.

For the reverse of the 1/10 oz Gold Mexican Libertad coin, the Mexican coat of arms is featured in the center. It is encircled by the nation’s name in Spanish above, “Estados Unidos Mexicanos,” and a wreath below.

If you have any questions about these gold coins for sale, please contact Silver.com. You can reach us at 888-989-7223, chat with us live online, or email us.