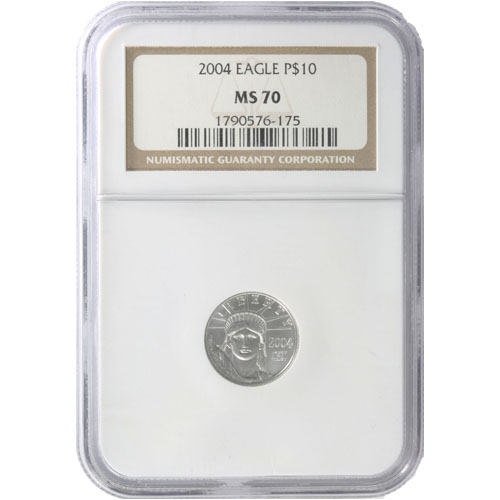 The 1997 debut of the Platinum American Eagle bullion coin came with 1 oz, 1/2 oz, 1/4 oz, and 1/10 oz coins available to purchase. This remained the case from 1997 to 2008, at which point the US Mint suspended platinum coin production and opted not to revive the fractionals in 2014 when the 1 oz coin returned.

During the 12 years it was produced by the US Mint, the 1/10 oz Platinum Eagle outsold the other versions of the coin five times. It was the best-selling coin in the debut release with 70,250 coins sold, a mark that is second-best in the series behind only the 1998 1 oz coin with 133,002 units sold.

On the obverse of 1/10 oz Platinum American Eagle coins is a vision of the Statue of Liberty as she gazes into the future. The reverse side depicts an American bald eagle as it glides over the continent.

These 1/10 oz Platinum American Eagle coins have Mint State 70 certifications from the PCGS or NGC. This indicates a coin with full, original mint luster and no detracting flaws. These coins are offered today by Silver.com from random years. Possible date marks include 1997-2008, but we cannot guarantee a specific date mark. All coins are chosen at random. If you buy more than one, please note you could receive several from the same year.

We encourage Silver.com customers to call us at 888-989-7223 with questions about platinum coins. You can also reach out to us online through our live chat and email address features.