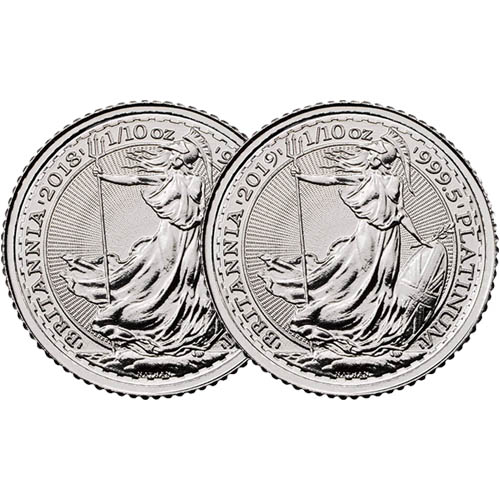 Any quantity available for $40.99 per coin over spot!

Britannia is a vitally important image to the people of Great Britain. Her history as a female personification of the people and a guardian of the British Isles dates back to the Roman Empire’s occupation of the islands in the 1st century AD. She first appeared on British coinage in the 18th century. Right now, 1/10 oz Platinum British Britannia Coins are available to purchase online at Silver.com.

Each of the 1/10 oz Platinum British Britannia Coins available here today comes in its original Brilliant Uncirculated condition from the Royal Mint. These coins are offered to you inside of protective plastic flips.

The Britannia design originated in the 1st century AD, but its first widespread use on British coinage came in the early 18th century with the official formation of the United Kingdom. Coinage representing the official union of England and Scotland issued around this time featured a depiction of Britannia.

Her image was revived in the modern era as the face of the nation’s official bullion coinage. The Gold Britannia debuted in 1987, followed by the Silver Britannia in 1997 and these Platinum Britannia coins in 2018, with a design from Philip Nathan. His design emerged as the first choice of the Royal Mint following a contest.

The reverse of all 1/10 oz Platinum British Britannia Coins includes the image of Britannia. Nathan’s design was praised for its depiction of Britain, through Britannia, as a powerful and timeless entity. Britannia wears a Corinthian battle helmet, wields a trident to control the seas in her right hand, and defends the nation with a shield in her right hand that has the Union Jack flag of Britain emblazoned upon it.

On the obverse of Platinum British Britannia Coins, you’ll find the depiction of Queen Elizabeth II. From the first issue year, Platinum Britannia coins feature the fifth-generation design of Her Majesty’s effigy. This right-profile portrait was created by Jody Clark of the Royal Mint in 2015 and depicts the Queen at the age of 89.

If you have any questions about these coins, please contact Silver.com. Our customer service team is available to you at 888-989-7223, online using our live chat, and via our email address. Don’t forget, you can also check the latest platinum prices on our website while you browse!