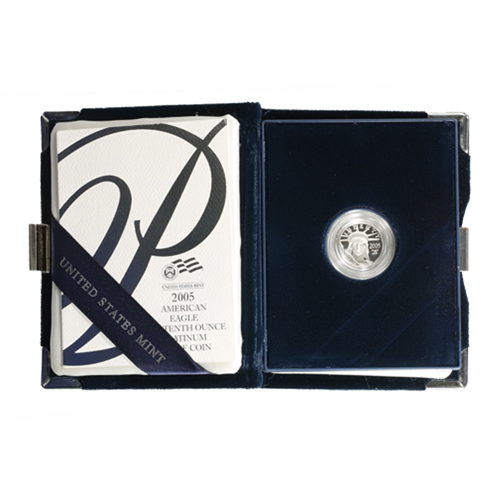 The third installment of the American Eagle Series, the Platinum American Eagle was introduced by the United States Mint in 1997. The series features a static obverse and reverse design combination in the Brilliant Uncirculated release, with changing design elements on the reverse of the coin when it was introduced in the Proof version in 1997. From 1997 to 2017, a new reverse debuted each year. As of 2018, new obverse designs appear each year. Now, 1/10 oz Proof Platinum American Eagles are available to you for purchase online at Silver.com from random years.

The obverse side of 1/10 oz Proof Platinum Eagles includes a depiction of the Statue of Liberty. Designed by John Mercanti, it features the stoic gaze of Liberty as she looks out into the distance wearing her tall, pointed crown.

On the reverse field of the 1/10 oz Proof Platinum American Eagle is an image of either American bald eagles or US national emblems. Many of the releases in this weight featured a depiction of the bald eagle, though certain coins had designs with the emblems of the branches of the federal government.

These 1/10 oz Proof Platinum American Eagles are available with a display box and a Certificate of Authenticity. Dates are chosen at random in this listing and range from 1997 to 2008. We cannot guarantee a date and design for you in advance. All items are selected at random after your payment has been processed. As such, it is possible to receive matching dates and designs on the coins you receive when buying multiples.

Silver.com customer service is available at 888-989-7223. Alternatively, you can contact us online through our live chat and email address features.