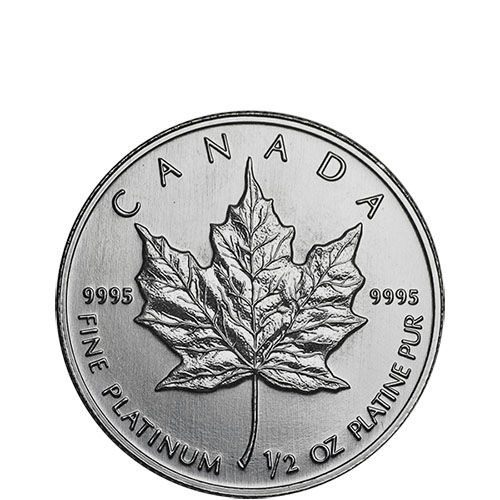 Platinum Canadian Maple Leaf coins were introduced by the Royal Canadian Mint in 1988. That first year of issue included a 1 oz, ½ oz, ¼ oz, and 1/10 oz choice for investors. The same weight options remained from the RCM until 1993 when a 1/20 oz coin was added. In 1994, the Royal Canadian Mint added a 1/15 oz coin to the collection, but only for that release year.

All ½ oz Platinum Canadian Maple Leaf coins available to you in this listing come from various years of issue. The ½ oz Platinum Maple Leaf only has possible date marks ranging from the 1988 introduction of the coins to the 2002 suspension of the series. Silver.com will send you a coin with a date mark based upon availability in our warehouse when your order is processed and packaged for shipping. We cannot guarantee or reserve a specific date mark for you.

The reverse of the ½ oz Platinum Canadian Maple Leaf coin includes the sugar maple leaf design in the center with engravings of the nation of issue, purity of the coin, metallic content, and weight. This design is from Walter Ott and the Royal Canadian Mint and debuted in 1979 on the Gold Maple Leaf.

On the obverse of ½ oz Platinum Maple Leafs is an effigy of Queen Elizabeth II. The 1988 and 1989 coins have Arnold Machin’s second-generation portrait of Her Majesty which was in use from 1965 to 1989. All other ½ oz Platinum Maple Leafs have the third-generation design created in 1990 by Dora de Pedery-Hunt, the first Canadian to design the Queen’s portrait for the RCM.

Please feel free to reach out to us with questions. Silver.com customer service is available at 888-989-7223, online through our live chat service, and via our email address.