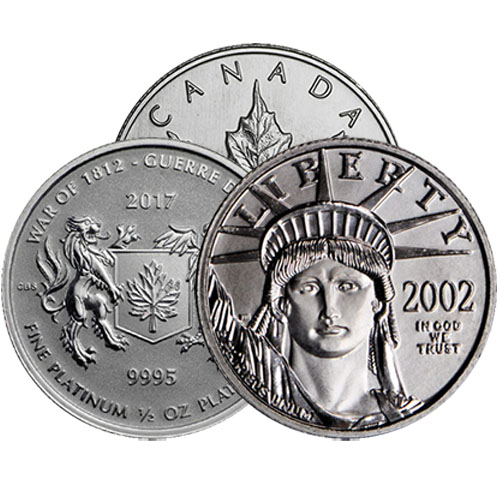 Platinum coins are available from a growing number of mints around the globe. You can find platinum bullion available at the United States Mint, Royal Canadian Mint, and the Perth Mint, among many others. While 1 oz platinum is the most popular, fractional-ounce platinum coins were once produced on a broad basis. Today, 1/2 oz Platinum Coins are available to you online at Silver.com in varied conditions.

While most look back into history and commonly see gold and silver in use as actual forms of currency in commercial use, fewer are aware of the fact that platinum coins were once issued by two major world powers for use in circulation. The Spanish Empire introduced platinum coins in its American colonies beginning in the 18th century, while the Russian Empire issued platinum coins into circulation in the 19th century. However, the difficulty in working with platinum, compared to more malleable gold and silver, lead to a halt in platinum as a form of circulating currency.

All of the 1/2 oz Platinum Coins in this product listing come to you inside of protective plastic flips. Coins listed here are in varied conditions and come from any mint. The coin you get could be in brand-new condition and show varying signs of wear and tear or production flaws from the issuing mint.

Silver.com selects your coins at our discretion based on availability. As all coins are randomly selected once your payment has been processed, we cannot guarantee what will be available at that time and which coins you will receive as a result. If you buy multiples, please keep in mind that the dates, designs, and conditions can all match.

Obverse and reverse designs on these 1/2 oz Platinum Coins are chosen by the issuing mint. Examples include the popular Platinum American Eagle, the Platinum Canadian Maple Leaf, and other commemorative, one-time issues. As an example of the latter, the Royal Canadian Mint issued a commemorative 1/2 oz platinum coin in 2017 marking the 200th anniversary of the War of 1812. The platinum coin was issued five years after the 2012 silver coin that it took its design inspiration from.

Please feel free to reach out to Silver.com with any questions. Our team is available on the phone at 888-989-7223, online using our live chat, and via our email address.