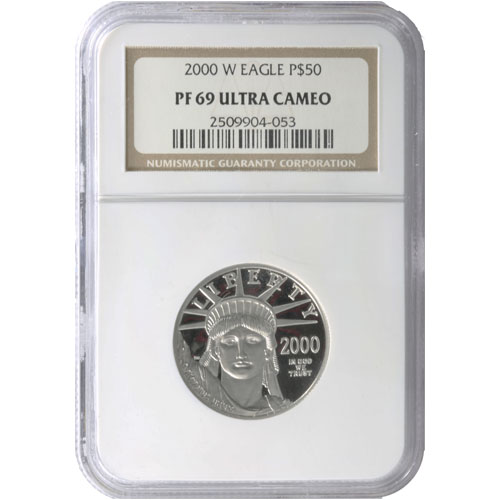 Proof Platinum American Eagles have fresh design elements each year. From 1997 to 2017, these changes took place on the reverse side of the coin each year. Starting in 2018, the series offered a common reverse for the first time ever with new obverse images of Liberty for the first time in the program’s history.

These 1/2 oz Proof Platinum Eagles were only available from 1997 to 2008, limiting the number of design series that were introduced on this weight. The coins include the possibility of the Thomas D. Rogers’ debut design from 1997 of the American bald eagle soaring over the nation. The Vistas of Liberty Series was similar with images of the eagle soaring over different regions of the country and was issued from 1998 to 2002.

On the reverse of 1/2 oz Proof Platinum American Eagles, you will find some of these varying images of the American bald eagle or other symbols of Americana. Beyond the Vistas of Liberty design series, the US Mint featured images of the heraldic eagle and Lady Justice on the coins from 2003 to 2005, with the 2006-2008 releases depicting symbols of the Legislative, Executive, and Judicial Branches of the federal government.

The obverse of 1/2 oz Proof Platinum Eagles comes with the design of the Statue of Liberty. Created in 1997 by John Mercanti, it focuses on the face of Lady Liberty from the iconic statue as she gazes into the future.

These 1/2 oz Proof Platinum American Eagles are near-perfect coins with PF69 grades. This indicates the coins have full, original mint luster with a maximum of two minor detracting flaws. Examples of acceptable flaws include only minuscule contact marks or hairlines. The UCAM label means the coins have strong, frosted designs and deeply-mirrored, clear backgrounds.

Coins in this listing are chosen at random once your payment has been processed. We do not guarantee specific date marks and designs, nor do we guarantee you’ll receive various dates and designs if you buy multiples.