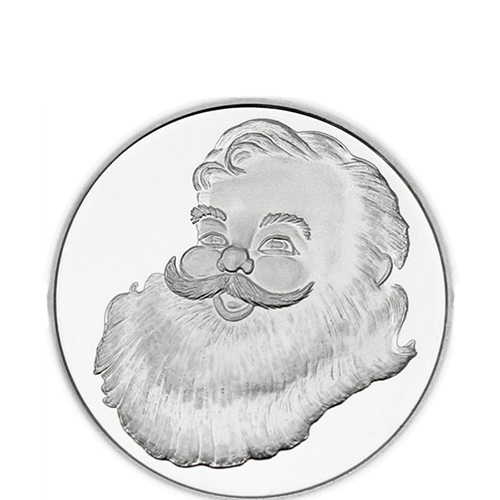 Christmas is one of the most beloved periods of time on the calendar each year. A celebration of the birth of Jesus Christ, Christmas is both a religious festival and a secular one. The secular celebration focuses on the magical antics of Santa Claus, his elves, and his team of flying reindeer. If you’ve lost faith in Jolly Ole Saint Nick, you can buy silver that reminds you of the magic and joy of the season. Right now, 1/2 oz Silver Believe in the Magic of Christmas Rounds are available to purchase online from Silver.com.

Each 1/2 oz Silver Believe in the Magic of Christmas Round is available to you in this listing as a product of SilverTowne Mint. The silver rounds in this collection are unique with their 1/2 oz silver weight and come with individual plastic flips for each specimen.

Santa Claus became a mythical figure associated with Christmas in the 19th and 20th centuries, but the figure is rooted in the deeds of an actual historical figure. In the 4th century, the Greek bishop Saint Nicholas lived in what is now modern-day Turkey. He was famed for using his portion of his family wealth to give away gifts to the poor in his town. One particular story tells of Nicholas giving away coins in the stockings of a poor family that were hanging by the fireplace to dry.

The obverse side of 1/2 oz Silver Believe in the Magic of Christmas Rounds comes with a depiction of Santa Claus. Known by names around the world that include Saint Nick, Saint Nicholas, Sinterklaas, and Father Christmas, Santa is often depicted in North America as a rotund figure with rosy cheeks, a white beard, white hair, and a red suit with white, fluffy trim. In the design on this face of the rounds, Santa is depicted without his hat on as he smiles at you. His thick, full beard is visible flowing down the front of his face as his manicured mustache reaches out from underneath his nose.

If you have any questions about these silver rounds, please feel free to ask. Silver.com customer service is available to help you at 888-989-7223, chat with you live online, or respond via our email address.