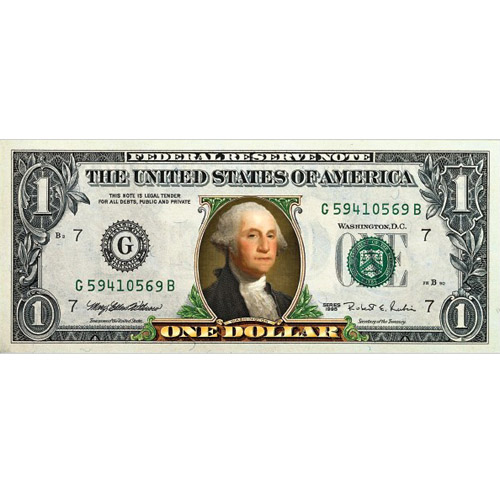 The smallest denomination of paper money issued in the United States is the $1 Federal Reserve Note. The only form of paper money currently produced by the US Treasury and the Bureau of Engraving & Printing, the Federal Reserve Note is available in seven major denominations. The $1 bill represents the bulk of US paper notes in circulation. Right now, $1 Colorized Legal Tender Notes are available to purchase online at Silver.com.

Each $1 Colorized Legal Tender Note in this listing at Silver.com comes from the Federal Reserve Note, the only form of paper money still produced by the US Treasury. The notes here were chosen directly from sealed Federal Reserve packs and are in crisp, clean, uncirculated condition. The notes have been enhanced with beautiful colors on both sides to bring new life to the common appearance of the US $1 bill. The notes ship with a clear acrylic display and boast a Certificate of Authenticity.

The obverse side of $1 Colorized Legal Tender Notes features the now-famous portrait of President George Washington. Portraits similar to this have appeared on large-sized United States Notes, large-sized Silver Certificates, and small-sized versions of the Silver Certificate and modern Federal Reserve Notes. President Washington’s portrait has classic additions of white and black to his overcoat and shirt, with white hair on his head and an average complexion. The porthole element around his portrait has green in the ornate elements with gold on the “One Dollar” notation.

On the reverse face of $1 Colorized Legal Tender Notes is an image of the all-seeing eye and the seal of the United States of America. The seal is enhanced with red, white, and blue on the US national shield, green on the olive branch, and the traditional brown-and-white feathers of the bald eagle’s plumage. Gold colorizations are added to the central design piece and the face value below the design.