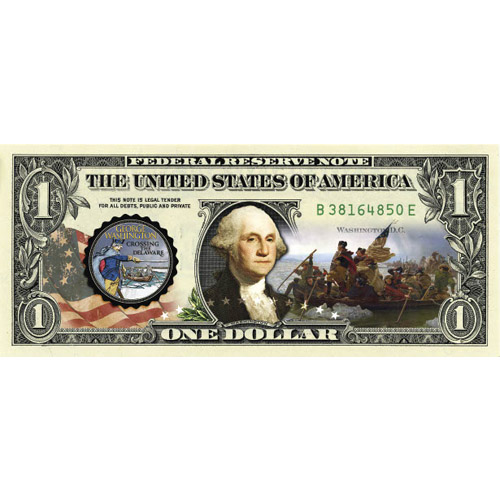 On Christmas Day in 1776, while the British Army and the Hessian mercenaries employed by the British Crown celebrated the holiday with feasts and alcohol, General George Washington and the Continental Army in the northern theater were strategizing a way to land a big blow to boost American morale before the winter halt in fighting. Washington’s crossing of the Delaware River helped make this possible and is celebrated in 2021 on the 245th anniversary of its occurrence. Now, $1 Washington Crossing the Delaware Legal Tender Notes are available to you for purchase online at Silver.com.

Despite early successes against the British Army in the first year of the American Revolution, the Continental Army was under pressure to deliver a victory to boost the morale of the American people. In the late-18th century, it was common for armies to halt attacks and take up camp for the winter months. In need of a victory before this occurred, Washington devised a bold plan.

He commandeered all of the available boats and other launches he could to move his 2,400 troops across the Delaware River to attack Hessian mercenaries guarding the town. With the Hessians ill-prepared after having celebrated Christmas the night before, Washington and his troops crossed the ice-choked river overnight and marched to Trenton where they would strike a decisive victory over the more experienced Hessian soldiers.

The obverse of $1 Washington Crossing the Delaware Legal Tender Notes comes with the traditional portrait of President George Washington at the center. This portrait has been on American currency in this form since 1928 when it appeared on the US $1 Silver Certificate. Here, it is colorized as commonly found in portraits of Washington. On the right side is an artistic rendering of Washington’s bold move to cross the icy Delaware River. On the left is the new US quarter reverse design with colorization that offers a different take on the moment. In the background is the original Stars and Stripes design.

On the reverse of Washington Crossing the Delaware Legal Tender Notes is the design that has been in use on the $1 Federal Reserve Note since 1963. Created in 1935 for the US Silver Certificate, it has the denomination noted in letters at the center with the all-seeing eye on the left and the Great Seal of the United States on the right.

These $1 Washington Crossing the Delaware Legal Tender Notes are available with a bi-fold presentation folio and a Certificate of Authenticity. The private mint that added the enhanced, high-definition graphics to the obverse picked these $1 notes from Federal Reserve packs. Each one is in clean, crisp, uncirculated condition.

Silver.com customer service is available at 888-989-7223. Alternatively, you can contact us online using our live chat and email address features.