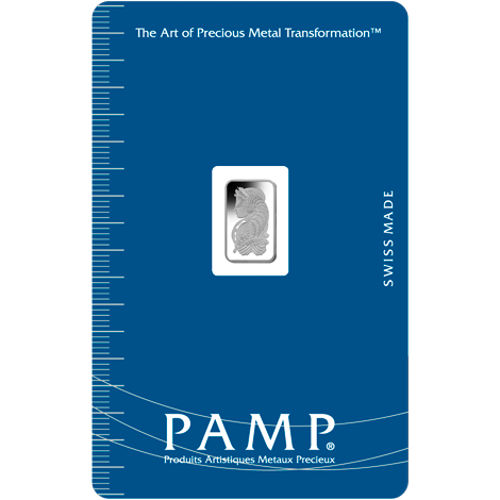 Any quantity available for $23.49 per bar over spot!

In the ancient world, Fortuna held many titles and roles. Most commonly associated with Roman mythology as the goddess of fortune, Fortuna also had roles as the personification of luck in Roman religion and as the goddess of fate when known as Atrox Fortuna. Her image is a popular design on PAMP Suisse bars, and is now found on the 1 Gram Palladium PAMP Suisse Fortuna Bar available on Silver.com.

Fortuna is considered one of the mightier gods in Roman mythology. Her father was believed to be Jupiter, King of the Gods. She was known as a bountiful goddess, and as yet another form she was known as Annonaria, a protector of grain supplies.

The depictions of Fortuna used throughout history and in other designs features common themes, most notably a blindfold or veil like the modern vision of Justice. Also, she has a cornucopia that speaks to her role as a bountiful goddess.

On the obverse face of the 1 Gram Palladium PAMP Suisse Fortuna Bar you’ll find a left-profile portrait of Fortuna. Her image features the goddess wearing a blindfold, with a cornucopia on her head spilling forth a bounty of coins. At the bottom of the bar is the image of her clutched hands catching the coins.

The reverse face of the coin bears the PAMP Suisse logo, as well as identifying markers. Engravings of the bar’s weight, purity, and metal content are featured, along with the assayer’s mark and the individual serial number of the bar.

PAMP Suisse was founded in Ticino, Switzerland in 1977. Originally a private, small facility, today it is owned by Geneva-based MKS Group. The MKS Group is a global financial services and precious metals group that includes PAMP Suisse, and has office around the world.

If you have any questions, Silver.com encourages you to reach out to our associates. You can reach us on the phone at 888-989-7223, connect with us online through our live web chat, or send us your questions in an email. If you are interested in similar products, be sure to check out our full selection of Palladium Bars.