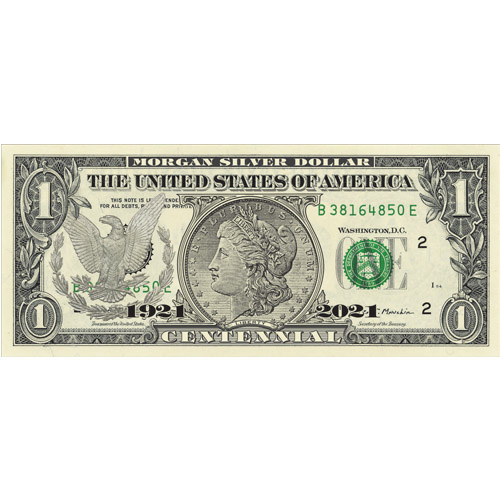 Silver Morgan Dollars were designed in 1878 by George T. Morgan, a man who enjoyed a prolific career with the United States Mint. He had just recently come to the US Mint from Birmingham, England, having been unable to land a job as an engraver with the Royal Mint of England. He was an assistant engraver in 1878 when he developed the obverse image of Liberty in left-profile relief and the heraldic eagle on the reverse. Morgan would go on to serve with the US Mint until his death in 1925, at which time he was serving as the Seventh Chief Engraver of the United States Mint.

Silver Morgans were struck by the US Mint initially from 1878 to 1904 under the authorization granted to the US Mint and Treasury under the Bland-Allison Act. When the US Mint had depleted the silver reserves procured through the Bland-Allison Act’s purchasing requirements, Silver Morgan Dollar coining ended in 1904. No fresh dollars were struck until 1921. The Pittman Act of 1918 authorized the return of silver dollars. The US Mint resumed coining from January until December 27, 1921, using the Silver Morgan Dollar design, making its last strike 100 years ago.

On the reverse of the $1 Silver Morgan Legal Tender Note is the design that has been in use on the Federal Reserve Note since 1963. Originally authorized by President Franklin D. Roosevelt in 1935 for the Silver Certificate, it depicts the all-seeing eye on the left and the Great Seal of the United States on the right.

These $1 Silver Morgan Dollar Legal Tender Notes are US legal tender from Federal Reserve packs. These crisp, clean, uncirculated notes have high-definition, enhanced graphics on the obverse. These notes are packaged in bi-fold displays with a Certificate of Authenticity included.