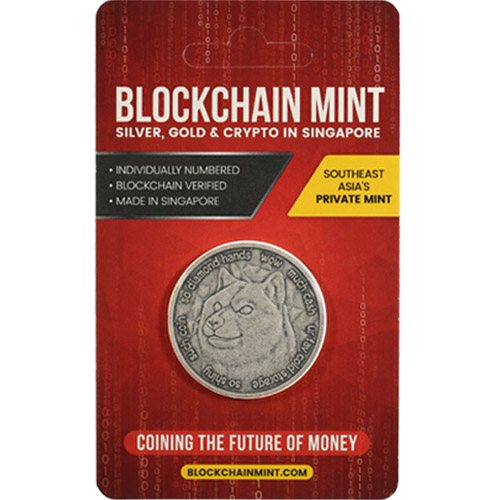 The modern investor has far more options than stocks, bonds, and mutual funds. Precious metals have surged in popularity in recent decades as a storage of wealth, and more recently, so too have newly introduced forms of cryptocurrency. These all-digital forms of monetary payment are never held in hand, and in fact, don’t even exist in a physical form. However, that doesn’t mean you can’t own a replica of the currency as it might appear in the form of coins. Now, 1 oz Antique Silver Crypto Commemorative Dogecoin Rounds are available to you for purchase online at Silver.com.

For thousands of years, gold and silver were universally viewed as a storage of wealth and also used as a form of currency. In fact, it wasn’t until the 1930s that most modern nations began to abandon the gold standard in favor of fiat currencies that were not backed by hard assets of gold and silver.

Fast forward to 2009 and the world was introduced to its first all-digital currency. Bitcoin and other forms of cryptocurrency that have emerged since are peer-to-peer forms of payment. The money is stored entirely online, has no physical representation, and is not regulated by a central bank or monetary authority. Spikes in cryptocurrency values in recent years have seen some take to mining Bitcoin and alt-coins as a form of investment against inflation in fiat currencies and market variations.

On the obverse of 1 oz Antique Silver Crypto Commemorative Dogecoin Rounds is an image of the Shiba Inu that serves as the logo of Dogecoin. The Shiba Inu became popular in January 2013 with the Doge meme and was immediately the focus of a new cryptocurrency. Oddly enough, the developers of Dogecoin intended it as a joke based on the Doge meme, but the alt-coin has found a market among users anyway.

These 1 oz Antique Silver Crypto Commemorative Dogecoin Rounds are available in individual blistercards with a QR code on the reverse that connects you to the Certificate of Authenticity. Each silver round has an antique polish applied for a visual distinction of these specimens.