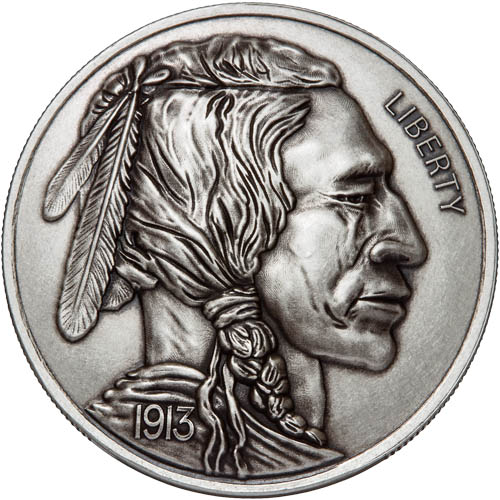 The silver for sale in the American Legacy Collection from the Osborne Mint not only features four iconic American coin designs, it boasts a total of three different versions of those designs for each release. Included in the collection alongside proof and colorized proof rounds, you will find antique rounds for sale. Now, 1 oz Antique Silver Domed American Legacy Buffalo Nickel Rounds are available to you for purchase online at Silver.com.

Buffalo Nickel coins were introduced by the United States Mint at a time when American coinage was undergoing a massive overhaul in design. The Barber Coinage on dime, quarter, and half-dollar denominations was soon to be replaced in 1916 and gold coins in the Gold Eagle denominations had already been replaced in 1907.

James Earle Fraser was chosen to redesign the nickel and completed his work in 1913. His design was inspired by his life growing up in the Upper Midwest. A native of Winona, Minnesota, he frequently traveled through Minnesota and the Dakotas with his father who was a railroad employee. His design on the obverse of the nickel is recreated here in the American Legacy Collection.

The right-profile portrait of a solemn Native American figure is featured on the obverse of the 1 oz Antique Silver Domed American Legacy Buffalo Nickel Round. With a high, domed curve to this side, the depth of the relief and detail of the Native American figure’s portrait is unprecedented in its quality. Inscriptions on this side include a commemorative date mark from the circulation history of the Buffalo Nickel and the word “Liberty.”

For the reverse, the Osborne Mint uses a reflected image of the Native American from the other side of the 1 oz Antique Silver Domed American Legacy Buffalo Nickel Round. Here, the same figure is featured in left-profile relief on the sunken side of the round. Inscriptions here include the weight, purity, and metal content of the round.

These 1 oz Antique Silver Domed American Legacy Buffalo Nickel Rounds are available with a custom-fitted capsule for the domed specimen. Individual rounds have unique serial numbers etched on the edges and a Certificate of Authenticity with that same serial number.

We encourage Silver.com customers to call us at 888-989-7223 with questions. You can also reach us through our live chat and email address.