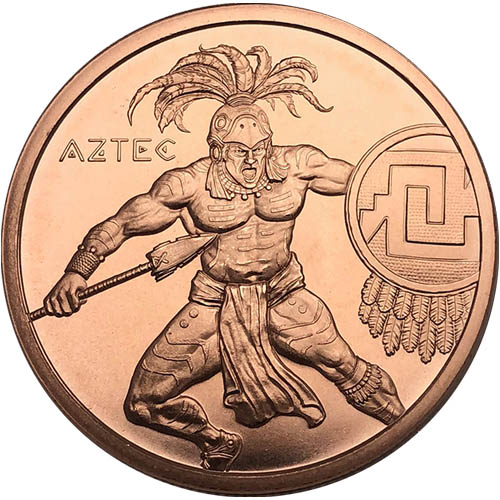 Like any modern military, the army of the Aztec Empire was organized into different units and classes in battle. Known as the most ferocious fighters in the New World, the Aztec warrior helped establish the Aztec Empire as a power in central Mexico and kept its enemies at bay for a century. Now, 1 oz Copper Aztec Warrior Rounds pay homage to these skilled fighters and are available to you for purchase online at Silver.com.

By in large, the Aztec army consisted of large numbers of commoners. These individuals had basic military training only and like the Spartans, all young males were put through compulsory military training early in life. Participation in the army and success in battle was the only way for commoners in the Aztec Empire to move up into higher echelons of society.

Although the Aztec army was built largely on the participation of commoners, there was still a sizeable number of soldiers in the Aztec army that were highly-trained, skilled fighters. Among the people of Tenochtitlan, eagle warriors and jaguar warriors were the elite fighting forces contributed to the broader Aztec army.

On the obverse side of the 1 oz Copper Aztec Warrior Round is the image of one of these eagle warriors. Considered the special forces of the Aztec army, eagle warriors were exceptionally skilled at conducted raids on their own in groups that typically consisted of only other eagle warriors. Easily recognizable in battle, eagle warriors wore helmets with extensive plumage and an open eagle’s beak while wielding shields dressed in feathers.

Eagle warriors weren’t the only elite forces in the Aztec army easily distinguishable by visual appearance. Jaguar warriors fought in the frontlines of battle alongside groups of commoners and typically dressed themselves in the full skin of a jaguar with only their face visible.

The reverse face of Copper Aztec Warrior Rounds bears the image of a Spartan warrior’s helmet. The city-state of Sparta possessed the strongest military in Ancient Greece and its elite fighters used weapons including the Dory spear, short sword, and battle axe to defeat their enemies. Each of these weapons features behind the helmet in this design.