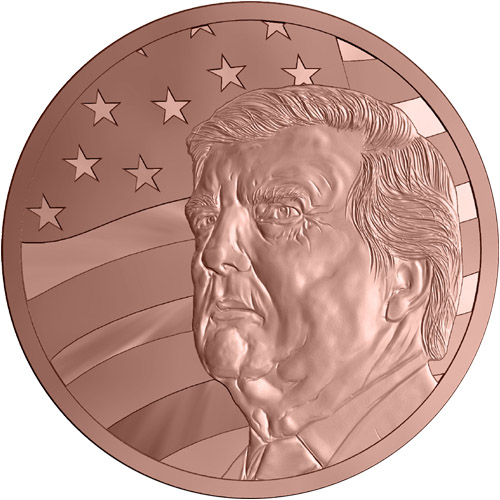 After four years in office, President Donald J. Trump faces the campaign trail again as he runs for reelection to a second term as President of the United States of America. President Trump emerged victorious, to the surprise of many, in the 2016 US General Election. In the process, he soundly defeated Democratic candidate and former First Lady of the United States, Hillary Clinton by 304 to 227 votes in the US Electoral College. Today, 1 oz Copper Trump for President 2020 Rounds are available to you online at Silver.com.

All of the 1 oz Copper Trump for President 2020 Rounds in this product listing come in brand-new condition from the mint of issue. You will receive your copper rounds inside of protective plastic flips.

On the obverse side of Copper Trump for President 2020 Rounds is a portrait of President Donald J. Trump. This left-profile image of the president captures his face with a stoic glance. The American flag fills the background field behind the effigy of the 45th President of the United States of America.

Please don’t hesitate to contact Silver.com if you have any questions. You can call our team on the phone at 888-989-7223, chat with us live online, or submit your inquiries in writing via email.