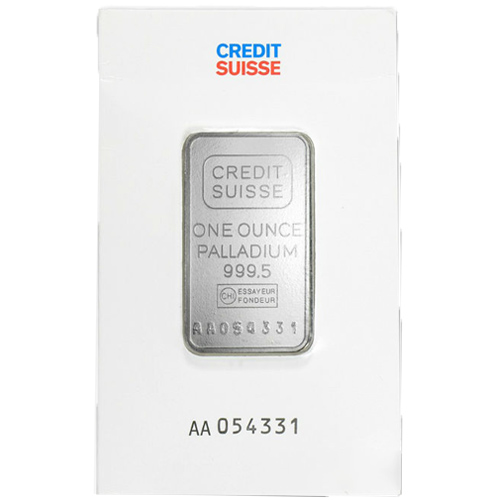 Palladium is one of the increasing popular precious metal choices in bars and coins, yet remains relatively unknown by the wider populace. Closely related to platinum, palladium is used by private and sovereign mints to strike everything from proof coins to bullion bars. The 1 oz Palladium Credit Suisse Bar is available to you today online at Silver.com.

Credit Suisse has one of the most unique background stories of any mint or refinery in the world. Founded in 1856 by Alfred Escher, Schweirzerische Kreditanstalt (or Swiss Credit Union) was created in order to help fund the development of the national rail system in Switzerland. The group issued loans to help create the Swiss electrical grid also, and even provided funding for the European rail system.

William Hyde Wollaston discovered a silvery-white precious metal in 1803 that would come to be known as palladium. As a chemical element, palladium is grouped within the platinum metals group with platinum, rhodium, ruthenium, iridium, and osmium. Each of the metals in this group share similar chemical properties.

Palladium is sometimes mistaken at first glance for platinum because it has a similar, lustrous silvery-white appearance. Compared to its fellow platinum group metals though, palladium has the lowest melting point and is the least dense metal in the group. Major ore deposits of palladium are concentrated in four areas of the globe: South Africa’s Transvaal Basin, Montana’s Stillwater Complex, the Thunder Bay district of Ontario, and the Norilsk Complex in Russia.

The 1 oz Palladium Credit Suisse Bars available in this product listing with Silver.com have all primary engravings on the obverse face of the bar. Included on this face are the name and logo of the refinery, Credit Suisse, at the top of the bar. The remaining engravings are listed vertically down the face of the obverse side, and include “One Ounce,” “Palladium,” and “999.5.”

We encourage all Silver.com customers to contact us with questions. You can reach us on the phone at 888-989-7223, or connect with us online through our live chat and email features.