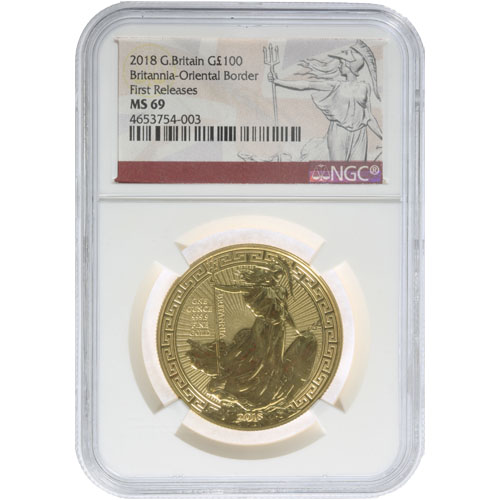 Gold British Britannia coins are available annually from the Royal Mint of England. The sovereign mint of Britain revived one of the nation’s most iconic symbols in the form of Britannia for a new bullion collection. The gold coins debuted in 1987, followed by the silver coins in 1997. The 1 oz Gold British Britannia Coin is now available to you for purchase online at Silver.com in near-perfect condition.

Britannia is one of the oldest images in the British realm. The name was originally used as the provincial label for the British Isles when the Roman Empire expanded across the sea from continental Europe. Later, Britannia became a female personification for the British people and was first used on British coinage during the early 18th century.

On the obverse of 1 oz Gold British Britannia Coins is a depiction of Queen Elizabeth II. Here, you’ll find the effigy of Queen Elizabeth II in right-profile relief. Her Majesty is depicted in various possible reliefs on these coins. Those issued from 1987 to 1997 have Raphael Maklouf’s third-generation design. Those coins struck from 1998 to 2015 have Ian Rank-Broadley’s fourth-generation effigy. All coins issued from 2016 onward include Jody Clark’s fifth-generation portrait.

The reverse of Gold British Britannia Coins includes the powerful image of Britannia. She is depicted here with the shield bearing the Union Jack in one hand and the trident to control the seas in the other hand.

These 1 oz Gold British Britannia Coins come with a Mint State 69 certification from the PCGS or NGC. Specimens in this condition showcase full, original mint luster with no more than two minor detracting flaws. Those flaws are limited in nature to minuscule contact marks or hairlines. If you buy more than one coin, please note that you could receive several coins with the same designs and varied labels if you purchase more than one.

We encourage Silver.com customers to call us with questions at 888-989-7223 when buying gold. You can also reach out to us online through our live chat and email address features.