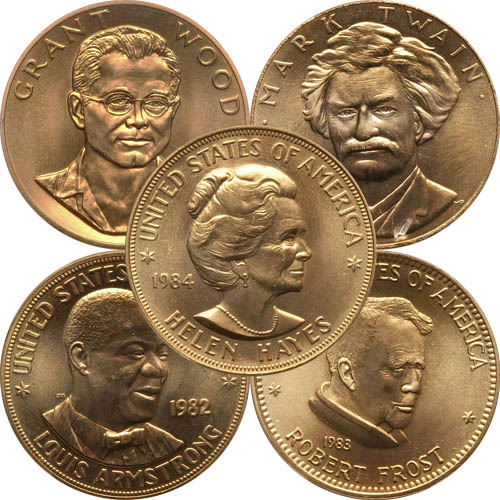 Any quantity available for $64.99 per oz over spot!

From 1980 to 1984, the United States Mint issued a series of commemorative gold medals as a means of competing with the demand for the Gold South African Krugerrand. With the Gold American Eagle still years away, the US Mint’s gold medals in this collection marked the first piece of gold sold by the US Mint since 1933. Today, 1 oz Gold US Mint Commemorative Arts Medals are available to you online at Silver.com.

The United States Mint introduced the 1 oz Gold US Mint Commemorative Arts Medals in 1980. The series included 10 designs in all, with five issued on 1 oz gold medals and five more issued on 1/2 oz gold medals. Frank Gasparro, the 10th Chief Engraver of the United States Mint and current Chief Engraver in 1980, designed the first image in the series in 1980.

On the obverse face of 1 oz Gold US Mint Commemorative Arts Medals is the design of one of five prominent Americans. Released from 1980 to 1984, the individuals featured on the obverse include (in order) Grant Wood, Mark Twain, Louis Armstrong, Robert Frost, and Helen Hayes. The designs on the obverse feature only the individual’s name on the 1980 and 1981 issues, with the 1982-1984 issues including the nation of issue and a date mark.

The reverse side of Gold US Mint Commemorative Arts Medals include varying designs based upon the individual featured on the obverse. The Grant Wood design has his famed American Gothic artwork while the Robert Frost design includes an excerpt from his poem “The Road Not Taken.”

US Mint Commemorative Arts Medals had varying mintage figures, with the 1980 and 1983 issues having the highest figures at 500,000. The medals were met with modest demand as the first gold offered by the mint since 1933, but paled in comparison to later issues of 1984 Olympic Gold Coins and the Gold American Eagle. The latter options arrived after President Ronald Reagan’s embargo on Gold Krugerrands in 1985.