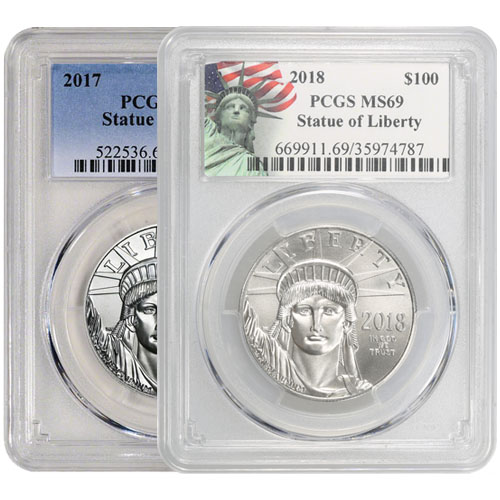 If you buy platinum coins from the United States Mint, the Platinum American Eagle is your only major option each year. Released in 1997 with bullion and proof options, the Platinum Eagle is well known as the only major, annual-release bullion coin from the US Mint with new designs on one side of the coins. Today, 1 oz Platinum American Eagle Coins are available to you online at Silver.com.

All of these 1 oz Platinum American Eagle Coins are available to you for purchase in near-perfect condition. The PCGS issues a Mint State 69 certification to coins with full, original mint luster and a maximum of two minor detracting flaws. Examples of acceptable flaws include minuscule contact marks or hairlines, and they must be present only outside the primary focal points of the coin.

Silver.com offers Platinum American Eagle coins in this listing as a random year allotment. We’ll select your coins at random once your payment has processed. We cannot guarantee a specific date mark or hand select various different date marks if you buy more than one coin.

On the obverse of 1 oz Platinum American Eagle Coins is the image of the face from the Statue of Liberty. This image was designed in 1997 by John Mercanti, the man who would go on to serve as the 12th Chief Engraver of the United States Mint from 2006 to 2010. The reverse includes the design of an American bald eagle soaring above the continent. This image came from US Mint engraver-sculptor Thomas D. Rogers.

Please feel free to reach out to Silver.com with questions. You can call us at 888-989-7223, chat with us online, or simply send us an email.