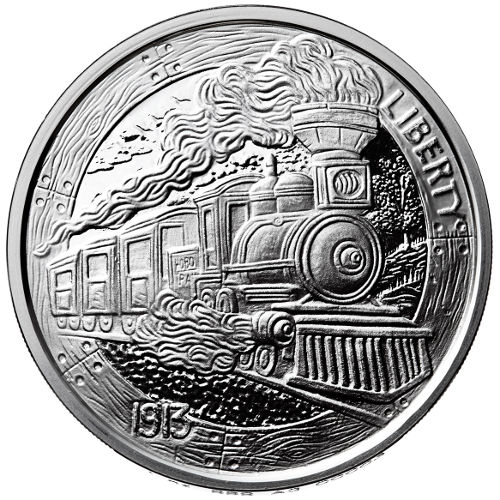 More and more often investors are turning to rounds as a way to invest in silver as they are a great alternative to silver bars due to their low premiums over the spot price of silver.

Hobo art on circulating American coins was a popular past-time among the nation’s traveling vagabonds during the 18th, 19th, and early 20th centuries. The preferred coin for this work was the nation’s five-cent piece. It was more popular than the one-cent piece because it was as readily available, but offered a larger surface to work with.

In the early 20th century, the Buffalo Nickel design from James Earle Fraser was a favorite among hobo artists who added their own flair to the already intricate design of the coin. Its malleable metal content made it easy for hobo artists to use any manner of tools to scratch, engrave, and punch holes in the coins.

On the obverse of these 1 oz Proof Silver Train Hobo Nickel Rounds you’ll find a steam locomotive rolling down the tracks. Engravings similar to the original Buffalo Nickel are included, and feature “Liberty” along the right edge and a year of issue, “1913” in this case, in the lower left.

The reverse depicts a hobo as he walks along, knapsack in hand, while holding a walking stick. When you look at the coin with the hobo upright, the engravings of “United States of America,” “E Pluribus Unum,” and “Five Cents” are sideways. Turn the coin to read those horizontally, and the hobo eerily depicts the hump of the buffalo’s back from the original Buffalo Nickel.

If you have any questions, please don’t hesitate to ask. You can reach a Silver.com associate on the phone at 888-989-7223, chat with us live online, or send us an email with your questions. If you are interested in similar products, check out our full selection of Silver Rounds.