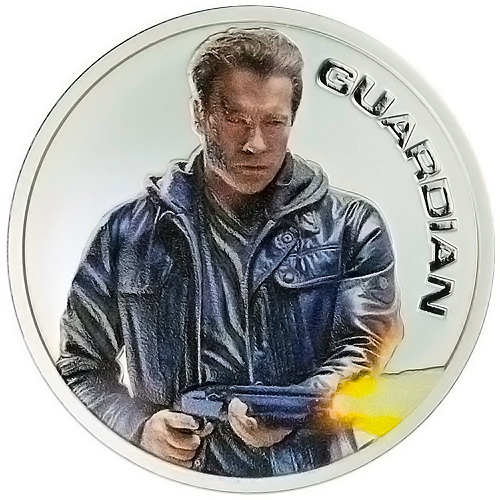 Few things were as frightening to moviegoers in the 1980s than the sight of the Terminator hunting down first Sarah Connor, and later her son John. Represented in the role by action hero Arnold Schwarzenegger, the T-800 cyborg was an unstoppable killing machine that left many moviegoers on the edges of their seats. Right now, the 1 oz Proof Silver Stardust Terminator Genisys Guardian Round is available to purchase online at Silver.com.

All 1 oz Proof Silver Stardust Terminator Genisys Guardian Rounds in this release have a colorized design on one face, with unique smooth edges and an individual serial number engraved on the edge of the round that coincides with the numbered Certificate of Authenticity that is available with each round.

Sarah Connor didn’t pose much of a threat in 1984, except for the fact that she was the mother of the man who would go on to bring down the Skynet system of machines that ruled the world in 2029. Fearing for its own safety, Skynet sent a Cyberdyne T-800 cyborg, known as the Terminator, back to 1984 to deal with Connor.

Arnold Schwarzenegger played the famous role of the T-800 in the three original feature films, and even returned recently to play the machine one more time in a 2015 reboot of the film franchise. The machine’s face is on one side, and its schematic design on the other. In the second film in the Terminator franchise, Schwarzenegger made his return in the role as the deadly cyborg Terminator. However, while the first film saw him return from the future to kill Sarah Connor, this second iteration of the Terminator had a very different purpose in mind.

The obverse of the 1 oz Proof Silver Stardust Terminator Genisys Guardian Round includes the image of Schwarzenegger as he first his trademark shotgun in defense of Sarah Connor fighting off the new cyborgs sent to do the job he failed to do in another capacity in the first film.

On the reverse of the 1 oz Proof Silver Stardust Terminator Genisys Guardian Round is the image of the mechanical skeleton of the Terminator cyborg. It includes the engravings of the cyborg’s technical name, the T-800.

Each of these silver rounds was struck by Sunshine Mint in Coeur d’Alene, Idaho for distribution by Stardust Silver, which is located in Las Vegas, Nevada in the “Silver State.”

If you have any questions, please feel free to contact Silver.com. Our team members are available at 888-989-7223, online using our live chat, or via our email address.