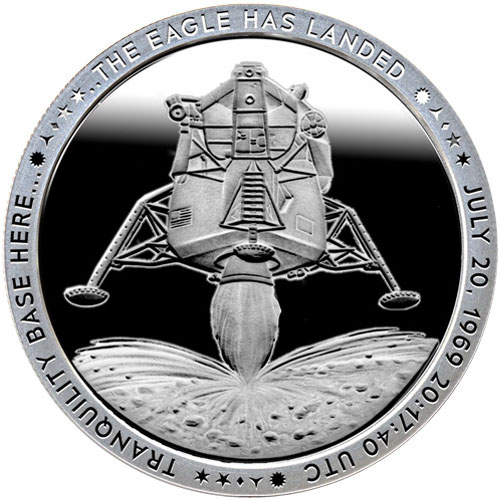 In July 1969, America’s NASA space agency achieved something that no nation or empire had ever achieved before. With mankind taking flight for the first time earlier in the century in 1903, NASA’s achievement of sending mankind to another celestial body seemed impossible. On July 20, 1969, though, impossible became possible. Today, 1 oz Silver Apollo 11 Eagle Landing Rounds are available to you online at Silver.com.

Just four days after the Apollo 11 spacecraft lifted off from Merritt Island, Florida, two of the three men in the crew climbed into the lunar module and began the descent down to the surface of the moon. Something that seemed impossible just decades earlier would come true as NASA astronauts Neil Armstrong and Buzz Aldrin landed on the surface of the moon in the Eagle lunar landing module.

All 1 oz Silver Apollo 11 Eagle Landing Rounds are available to you with protective air-tite capsules and come with individual serial numbers engraved onto the edges of the rounds. Each one is a proof-like specimen with frosted designs and mirrored background fields for visual contrast.

On the obverse side of Silver Apollo 11 Eagle Landing Rounds is the image of the lunar landing module known as Eagle. With its central thruster firing, the landing module slowly approaches the surface of the moon for the first time in human history. Engravings around the edge of the round include “Tranquility Base Here” and “The Eagle has Landed,” this was the message sent between mission command and the module as the astronauts inside landed safely on the moon.

The reverse face of 1 oz Silver Apollo 11 Eagle Landing Rounds features the image of an American bald eagle as it descends onto the surface of the moon with an olive branch in its talons. This is based upon the mission patch worn by the astronauts of the Apollo 11 mission.

Apollo 11’s mission lasted a total of 8 days, 3 hours, 18 minutes, and 35 seconds from the moment Apollo 11 lifted off from Florida to the moment the command module splashed back down to Earth. Armstrong and Aldrin spent a total of 21.5 hours of that time on the surface of the moon.

Please feel free to reach out to Silver.com if you have questions about buying silver. You can call us on the phone at 888-989-7223, chat with us live online, or send us an email with your questions.