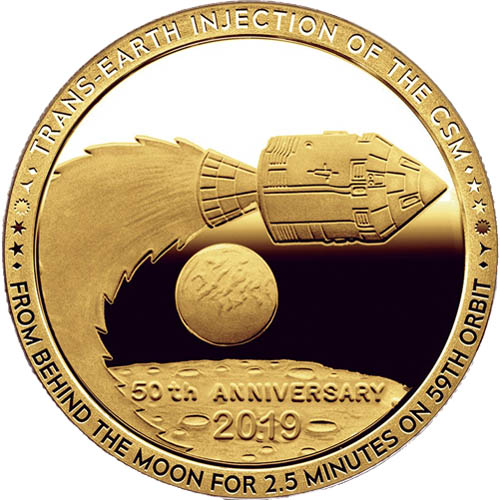 The silver for sale from the North American Mint’s Apollo 11 Series included eight unique designs. The collection was released in 2019 to mark the 50th anniversary of NASA’s 1969 achievement in sending three astronauts into space, landing two of them on the Moon, and returning the entire crew safely to Earth. Today, gold-plated 1 oz Silver Apollo 11 Earthbound Rounds are available to you online at Silver.com.

The astronauts of Apollo 11 did something no other human had ever done before. Well, two of them did. Michael Collins, Buzz Aldrin, and Neil Armstrong lifted off from Kennedy Space Center on July 20, 1969, headed for the Moon. When they reached lunar orbit, Aldrin and Armstrong descended to the Moon in the Eagle lunar lander while Collins remained behind to pilot the command module.

All of these 1 oz Silver Apollo 11 Earthbound Rounds are available to you for purchase with protective plastic capsules and a Certificate of Authenticity courtesy of the mint. The rounds boast gold-plated finishes on both fields, combining the beauty of silver and gold together in one product. The rounds are proof-like specimens with frosted designs and mirrored fields.

The obverse of the Silver Apollo 11 Earthbound Round features an image of the command module. After spending 21.5 hours on the surface of the Moon, Aldrin and Armstrong rejoined Collins in the command module. The crew would later jettison the Eagle lunar lander as the command module made its return trip to Earth with a planned splashdown in the South Pacific.

On the reverse side of 1 oz Apollo 11 Earthbound Rounds is a design inspired by the Apollo 11 mission patch. The patch depicts an American bald eagle as it lands on the Moon clutching an olive branch in its talons. The darkness of Space stretches out in the background toward a distant planet Earth some 269,000 miles away.

Please don’t hesitate to contact Silver.com if you have any questions about these rounds. You can call us on the phone at 888-989-7223, chat with us live online, or simply send us an email with your inquiries.