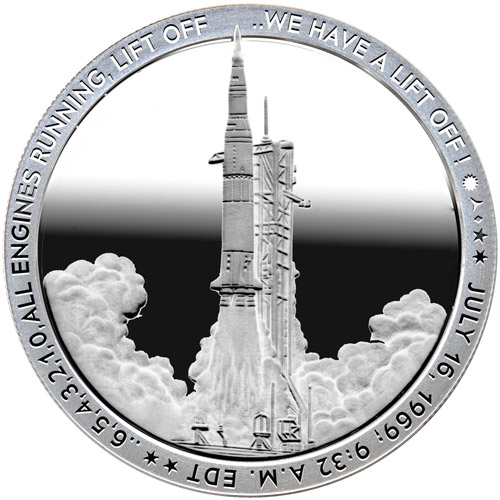 In 1961, President John F. Kennedy took the first steps to ensure America would eventually defeat the Soviet Union in the space race. Following the Soviet Union’s successful launch of Sputnik, America doubled down with the hopes of sending mankind into space, landing on a celestial body, and returning to the planet. The 1 oz Silver Apollo 11 Liftoff Round is currently available to you for purchase online at Silver.com.

The reverse face of Silver Apollo 11 Liftoff Rounds includes a depiction of the Apollo 11 mission patch. The design features an American bald eagle with its wings spread wide as it touches down to land on the surface of the moon clutching an olive branch in its talons. The design includes the moon’s surface at the bottom with the distant image of Earth in the background. Engravings within the design include the commemorative date marks (1969 – 2019) and the phrase “50th Anniversary.”

These 1 oz Silver Apollo 11 Liftoff Rounds are available to you for purchase with a protective air-tite capsule and a limited mintage figure of just 5,000 pieces of silver for sale. The rounds each feature a unique serial number engraved onto the edge as well.

We encourage all Silver.com customers to call us with questions at 888-989-7223. You can also connect with us online using our live chat service and our email address.