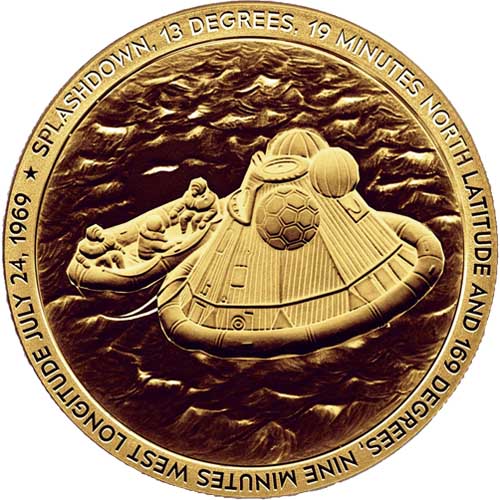 The Splash Down Round in the Silver Apollo 11 Series is the final release of eight images on 1 ounce silver rounds celebrating the iconic mission. The Apollo 11 mission took place over the course of eight days in July 1969 and captivated the imaginations of millions around the world. It was also one of the first widely broadcast incidents on a global scale. Now, 1 oz Silver Apollo 11 Splash Down Rounds are available to you for purchase online at Silver.com.

Long before the Apollo 11 spacecraft lifted off from Kennedy Space Center under the power of a Saturn V rocket, the USS Hornet aircraft carrier from the United States Navy departed for Pearl Harbor, Hawaii, from its home base in Long Beach, California. The USS Hornet had been commissioned into the US Navy during World War II and was chosen in 1969 as the recovery vessel for the Apollo 11 crew.

With the Apollo 11 crew and spacecraft sitting on the launch pad on Merritt Island, the USS Hornet reached Pearl Harbor. Here, it loaded several pieces of specialized equipment and a recovery helicopter, as well as specialized recovery teams, to assist in collecting the Apollo 11 crew after splashdown. When the Columbia capsule hit the waters of the South Pacific on July 24, the USS Hornet was there with a special delegation waiting to greet the crew.

The obverse of 1 oz Silver Apollo 11 Splash Down Rounds depicts the Columbia capsule resting on the waters of the South Pacific. A specialized US Navy dive team has reached the capsule in a dinghy to start the process of retrieving the crew from the capsule.

On the reverse of Silver Apollo 11 Splash Down Rounds is an image of the mission patch from Apollo 11. The design features an American bald eagle with wings flexed as it lands on the surface of the Moon with an olive branch in its talons.

These 1 oz Silver Apollo 11 Splash Down Rounds are gold-plated versions of the original designs with a full layer of 24-karat gold across the entire obverse and reverse of the round. Each one is packaged in an individual capsule and available with a Certificate of Authenticity. The proof-like rounds have frosting on the designs with a mirror-like field.