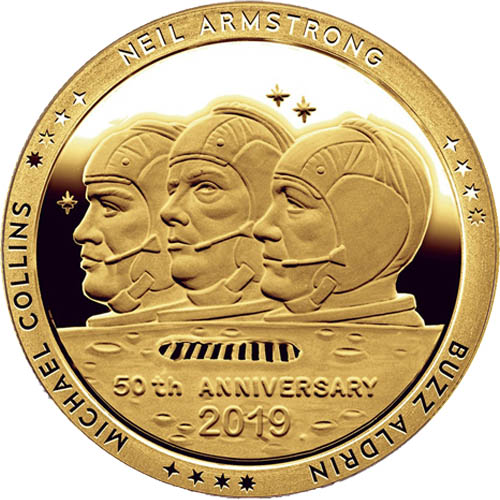 The Apollo 11 mission to the Moon in July 1969 was one of the greatest technological achievements of the 20th century. NASA spent the 1960s moving quickly to try and meet former President John F. Kennedy’s challenge to the nation to channel its energies into defeating the Soviet Union in the Space Race by sending men to the Moon and returning them safely to Earth. Three men formed the Moon-bound crew that achieved this feat in July 1969. Today, 1 oz Silver Apollo 11 The Crew Rounds are available to you online at Silver.com with a gold-plated finish.

NASA’s Apollo 11 mission launched from Kennedy Space Center on Merritt Island, Florida, on July 16, 1969. With the command module, service module, and Eagle lander packed atop a Saturn V rocket, the astronauts of the crew lifted off on mankind’s greatest space mission to date: putting humans on the Moon. The three-man crew consisted of Michael Collins, Buzz Aldrin, and Neil Armstrong.

All of the 1 oz Silver Apollo 11 The Crew Rounds listed here come with individual plastic capsules and a Certificate of Authenticity from the mint. These silver rounds have a stunning 24-karat gold plating applied to the entirety of the obverse and reverse design elements.

On the obverse of Silver Apollo 11 The Crew Rounds are the portraits of Collins, Aldrin, and Armstrong. The three men are shown in left-profile relief wearing their flight suits. Beneath the portraits of the three men is the lunar surface with a lone boot print impressed into the Moon, left behind by an astronaut as a simple of mankind’s accomplishments in the Space Race. Of the three-man crew, only Aldrin and Armstrong actually descended to the lunar surface. Collins remained in lunar orbit in the command module.

The reverse side of the 1 oz Silver The Crew Rounds comes with a replication of the Apollo 11 mission patch from NASA. The mission patch worn by all of the astronauts in the crew featured an American bald eagle landing on the surface of the Moon with an olive branch in its talons. The depiction of the eagle was a twist on the name of the lunar landing module known as the Eagle.

Please don’t hesitate to contact Silver.com if you have questions when buying a silver round. We are available to you on the phone at 888-989-7223, online through our live chat, and via our email address.