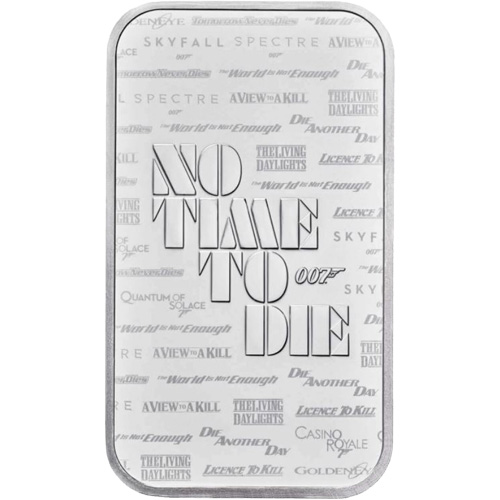 Any quantity available for $7.35 per oz over spot!

In 2020, Daniel Craig will reprise the role of James Bond for the fifth time when the 25th film in the Eon Productions franchise of James Bond films is released. With No Time To Die slated for release in the fourth quarter of 2020, mints from England to Australia have released collectible gold and silver bullion items for investors and collectors. Today, 1 oz Silver British James Bond No Time To Die Bars are available to you online at Silver.com.

James Bond films have been produced and released at varying paces throughout the history of the feature films. From 1962 to 1989, 16 films were produced and released by Eon Productions, with two outside films also produced for Bond fans. On average, a new film was released every other year during this period. In the 25-year period from 1995 to 2020, just nine films were released.

All of the 1 oz Silver British James Bond No Time To Die Bars listed here come with an individual plastic sleeve. The silver minted ingots in this No Time To Die bullion bar release from the Royal Mint of England have unique visuals. A combination of frosting and polishing delivers impressive visual contrast to these silver bars.

The emblem for the 007 films and the Royal Mint of England logo feature on the obverse field of 1 oz Silver British James Bond No Time To Die Bars. The 007 logo is the larger design element and features in the center of the design field. The Royal Mint logo is featured above this with the weight, purity, and metal content inscribed at the bottom.

For the reverse design field of the 1 oz Silver British James Bond No Time To Die Bars, the Royal Mint uses large, block lettering to produce the name of the upcoming film. “NO TIME TO DIE” is inscribed through the central foreground with the 007 logo next to it. The background field on both sides of the bar contains the names of the unforgettable movies from the Bond franchise.

Please don’t hesitate to contact Silver.com with your questions. We are available on the phone at 888-989-7223, online using our live chat, and via our email address.