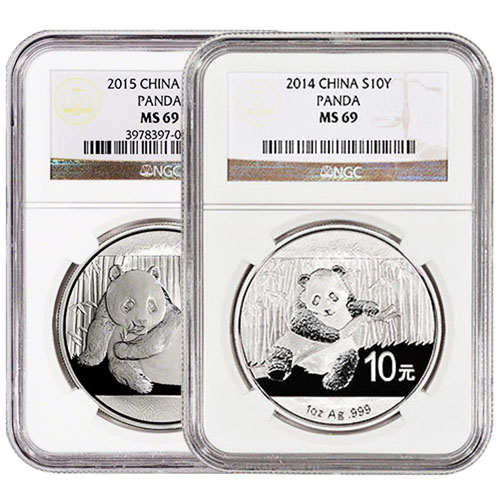 One of the world’s most popular silver coins for sale is the Silver Chinese Panda. Produced by the Chinese Mint starting in 1983, the Silver Pandas pioneered the concept of using fresh design elements on one side of the coin each year. From 1989 to 2015, the Chinese Mint issued its flagship silver bullion coin in 1 Troy ounce of .999 fine silver. Now, 1 oz Silver Chinese Pandas are available to you for purchase online at Silver.com in near-perfect condition.

The Chinese Mint produces the Silver Chinese Panda on an annual basis. From 1983 to 1985, the coins were only available as proof specimens. No coin was issued in 1986. In 1987, the coin returned for two more years as a proof specimen only. In 1989, the Chinese Mint introduced the coin as a silver bullion option for investors.

From 1989 to 2015, the coins were available as 1 oz Silver Chinese Pandas with a 10 Yuan face value. Starting in 2016, the Chinese Mint shifted the coins to Grams instead, replacing its 1 Troy ounce silver coin with a new 30 Gram Silver Panda coin.

The obverse of 1 oz Silver Chinese Pandas includes a vision of the Giant Panda. This species of bear is native to the central highlands of China. The large bears are easily recognizable for the patches of black and white fur on their bodies and live on a diet of bamboo, with the plant accounting for up to 99% of its diet.

On the reverse side of 1 oz Silver Pandas is a static depiction each year. The Hall of Prayer for Abundant Harvests is depicted on this side. The building is the largest structure in the Temple of Heaven Complex, a Taoist religious site that was built in Beijing between 1406 and 1420.

These 1 oz Silver Chinese Pandas are available to you with a near-perfect certification. The PCGS and NGC assign the Mint State 69 grade to coins that showcase full, original mint luster and have no more than two minor detracting flaws. Examples of acceptable flaws include only minuscule contact marks or hairlines outside of the primary focal points.

When you purchase one of these coins, Silver.com selects your specimen at random. We do not guarantee the date mark or design for your coin. If you buy more than one, you may receive several coins with the same dates and designs.

Silver.com customer service is available to assist you at 888-989-7223. We are also available online through our live chat and email address.