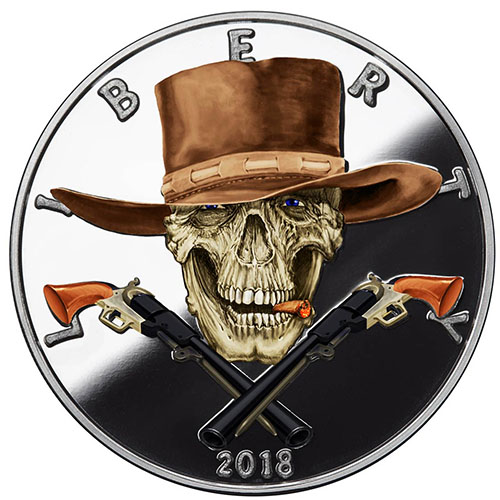 If you already buy silver in the American Western Skulls Collection, you’re probably familiar with the most unique offering among the series. The 1 oz proof colorized rounds bring a fresh take to the designs released in this collection, which total six in all. Today, 1 oz Proof Colorized Silver American Western Skulls Gunslinger Rounds are available to you online at Silver.com.

For the Proof Colorized Gunslinger Round, Osborne Mint has introduced a colorized layer of lacquer applied to the Gunslinger design on the obverse side only. The application of this lacquer layering does not alter the composition or purity of the silver, but it does bring out a new visual appeal in the design of the Gunslinger and other images used in this series.

All 1 oz Proof Colorized Silver American Western Skulls Gunslinger Round is available to you within a protective plastic capsule and ships with an individual Certificate of Authenticity. Each round has edge-lettered serial numbers that correspond to the number found on the COA included with your purchase.

Gunslingers were a staple of the Wild West, for better or worse. Among their ranks are names that most Americans are familiar with, such as Billy the Kid. Born Henry McCarty, Billy the Kid started his life of crime out of necessity, being charged with petty theft and horse thievery. He killed his first man at age 18, and by the time he died three years later at 21 he had killed one man for each year of his life.

On the obverse of the 1 oz Proof Colorized Silver American Western Skulls Gunslinger Round is the image of a fearsome gunslinger. This cold-blooded individual’s skull looks back at you with a glare that sizes up your ability to draw quicker than him. With his hat tilted low, eyes glaring, and a cigar butt in his mouth, he’s just waiting for you to reach for your holster.

The reverse of the Silver American Western Skulls Rounds feature the image of the heraldic eagle, with one twist. Known as the fried eagle, the bird featured in this design is not alive. This bird’s feathers have been charred off, leaving behind only its skeletal figure behind the US heraldic shield.

Please don’t hesitate to reach out to Silver.com with questions. You can contact us on the phone at 888-989-7223, chat with us live online, or email us directly.