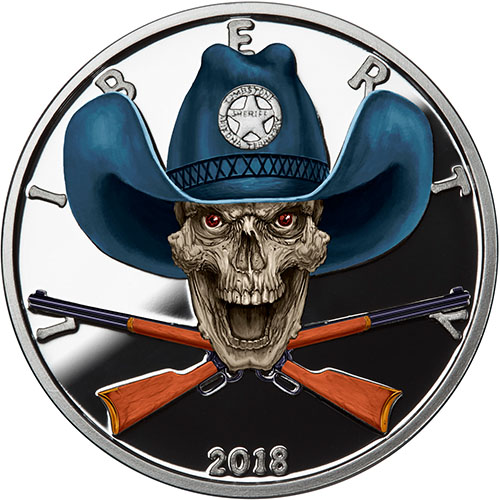 The latest release in the American Western Skulls Collection from the Osborne Mint is the Old Sheriff. The Wild West was a violent place, full of outlaws trying to take advantage of untapped land, vast expanses, and innocent settlers. Sheriffs were often all that stood in the way of these thugs. Today, 1 oz Colorized Proof Silver American Western Skulls Old Sheriff Rounds are available to you online at Silver.com.

Each of the pieces of silver for sale in the American Western Skulls Collection has its own, unique design. There are a total of six designs planned, ranging from the introductory Indian Chief to the Old Sheriff and Gunslinger. All the classic characters that defined the more than century-long period of the Old West on the American frontier appear in this collection.

All 1 oz Colorized Proof Silver American Western Skulls Old Sheriff Rounds in this offering are available to you with a protective plastic capsule and numbered Certificate of Authenticity. The COA reflects the exact serial number engraved onto the edge of the individual rounds, with numbers ranging from 1 to 1,000.

The Wild West might be a time captured in rare photographs of black and white, but the obverse of the 1 oz Colorized Proof Silver American Western Skulls Old Sheriff Round brings a piece of the Wild West to live in vivid color. The skull of the sheriff has the typical white-yellow hue of human bones, with a blue hat on the sheriff, and the wooden stocks of the rifles below in a natural hue of brown.

On the reverse of the Silver American Western Skulls Rounds you’ll find the design known as the fried eagle. A twist on the heraldic eagle of the United States, this bird is nothing but a skeletal form behind the heraldic shield. It still clutches the arrows of war in one talon and the olive branch of peace in the other.

Osborne Mint is America’s oldest private mint. The modern minting company traces its roots back to 1836 when Andrew Jackson was President of the United States, and there was no singular fiat currency accepted in the United States.

Please don’t hesitate to reach out to Silver.com with your questions. You can reach our team members on the phone at 888-989-7223, on the web using our live chat, and via our email address.