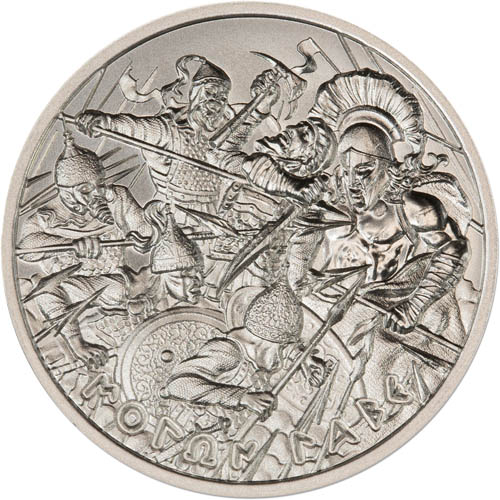 The Molon Labe Series from the Intaglio Mint continues to delight investors and collectors. The series offers new obverse designs with each release, while providing the same reverse design for each round in the collection. The eighth release of the series shows the brutality of the hand-to-hand combat that occurred during the Battle of Thermopylae. Right now, 1 oz Silver Molon Labe Rounds are available to purchase online at Silver.com.

Each 1 oz Silver Molon Labe Round available here is a new specimen from the mint that features the eighth design of the collection. The individual silver rounds in this series ship with plastic flips, while multiples of 20 are available in acrylic tubes.

The phrase molon labe comes from Ancient Greek and translates roughly into English as come and take them. When offered a chance to live if he laid down his arms, King Leonidas of Sparta responded with the above phrase to Xerxes, leader of the Achaemenid Empire. For three days, Leonidas, 300 elite Spartan warriors, and an additional 6,700 Greeks used the terrain of the hot gates to their advantage to nullify the superior numbers of the Persian Army and force them into a series of brutal close-quarters encounters in which the skill and discipline of the Greeks bought valuable time.

The obverse of Silver Molon Labe Rounds comes with a depiction of Spartans and Persians locked in brutal combat. The field shows various warriors with a variety of weapons fighting in close quarters during the Battle of Thermopylae.

On the reverse side of 1 oz Silver Molon Labe Rounds is the Intaglio Mint logo. The logo for the mint is set in the very center circle with a Romanesque column in the shape of an I representing the logo of the mint. The background field on this side has radial lines in a swirling pattern with the identifying hallmarks of the round inscribed around the outer edge of the field.

The Battle of Thermopylae has gone down in history as a loss for the Greeks, but also as a moment of sacrifice and sheer bravery on the part of the 300 Spartans, King Leonidas, and the other accompanying Greeks. Leonidas and his men fought to hold the Persian Army for as long as possible to slow its advance into Greece while the other city-states readied their armies for a larger clash.