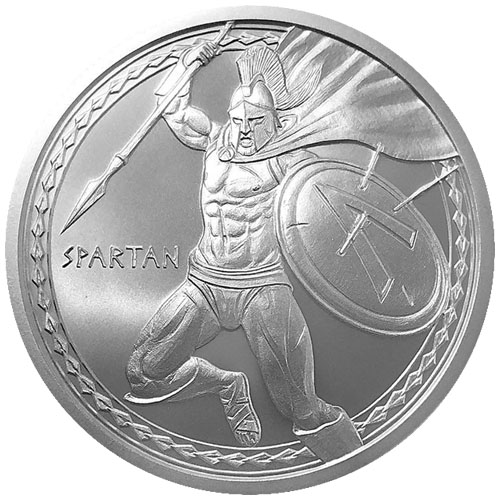 While the image of the Spartan army common in the minds of modern humanity comes from the Battle of Thermopylae, as depicted in the feature film 300, the Spartan army existed well before and after this event. For more than two hundred years, Sparta was the preeminent city-state in Greece. Right now, 1 oz Silver Spartan Warrior Rounds are available to purchase online at Silver.com with their image.

On the obverse of 1 oz Silver Spartan Warrior Rounds, you’ll find the imposing figure of a Spartan warrior leaping through the air to drive his spear into an enemy on the field of battle. In his left hand, he wields a shield to defend himself while he prepares to land a death blow with the spear in his right hand.

Spartan warriors were considered the elite forces of antiquity and for good reason. Their successes on the battlefield were the result of a lifetime of training. It is said that young boys were judged almost immediately at birth by their appearance and whether or not it was presumed they’d grow to be good warriors. In any case, Spartan males began a lifetime of military training at the age of six that included sports, lessons in tactics, and physical drills to boost stamina and strength.

The reverse of Silver Spartan Warrior Rounds includes the Corinthian helmet of Spartan warriors. Behind it, you’ll notice the spear used in the phalanx wall. The short sword and battle ax used in close combat are also depicted.

If you have any questions about this silver for sale, please contact Silver.com. Our customer service team is available to you at 888-989-7223, online using our live chat, and via our email address.