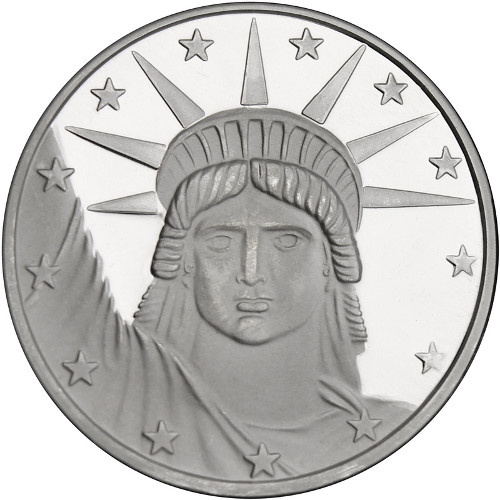 Rounds are popular precious metals products due to their low premiums over spot silver price. SilverTowne Mint, located Indiana, is just one of many mints that produces quality silver rounds that won’t break the bank. Now, you can purchase 1 oz SilverTowne Lady Liberty Silver Rounds at Silver.com.

Now, the statue is known as a symbol of hope, freedom and unlimited possibilities to immigrants. Over the years, Lady Liberty has greeted millions of people seeking new homes in the United States at Ellis Island.

On the obverse of each 1 oz SilverTowne Lady Liberty Silver Round, you will see a front-facing portrait of Lady Liberty. The image is taken directly from the Statue of Liberty, so the image will be very familiar. She is shown as a depiction of the Roman goddess of freedom, Libertas. Dressed in a robe, she holds a torch in one hand above her head, while the other clutches a tablet that symbolizes the laws of the land. The tablet bears the inscription of July 4, 1776, the date of America’s independence.

The reverse of these rounds highlights the image of Lady Liberty’s torch. The torch is a symbol of a guiding light that she holds for all to use to see. Another take on the torch is that it is a shining light of freedom to people who experience oppression in their native lands.

SilverTowne is a private mint located in Indiana. The company was founded in 1949 as a small coin shop, but has grown into one of the most influential mints in the United States.

If you would like to purchase these rounds or have any questions at all, you can call Silver.com at 1-888-989-7223. Alternatively, you are able place orders securely online 24/7 and can reach out to us through live chat and email. We look forward to speaking with you and answering any questions you might have.