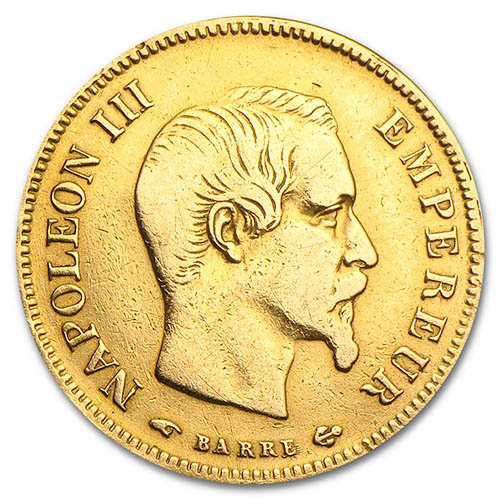 The Francs gold coins were issued by France first during the rule of Napoleon Bonaparte. With the nation coming out of its revolution, Napoleon served as First Consul and his depiction graced a series of silver and gold coins in denominations ranging from 1 Franc, 5 Francs, and 10 Francs up to 40 Francs. The coins became so widely used and popular that they were simply referred to as Napoleons by some French. The 10 Francs Gold Coin with Napoleon III’s bust is currently available to you for purchase online at Silver.com.

Napoleon Bonaparte came to power as a First Consul of France following the Revolution, but would eventually install himself as the Emperor of a new French Empire. His reign would end in exile from the country after disastrous military campaigns. His nephew, Napoleon III, eventually came and went from power in a similar manner.

The 10 Francs Gold Coins available here today feature the bust of Napoleon III on the obverse side. He came to power in 1848 as the first man ever elected President of France of the French Republic through a direct majority vote. He was also the youngest man elected to the post until the 2017 election of Emmanuel Macron.

After a four-year term though, Napoleon III brought about the end of the French Republic through a coup that reestablished the French Empire with him at the helm as Emperor of France. Like his uncle before him, his rule would end in exile from his homeland.

The obverse side of all 10 Francs Gold Coins includes one of two variations on Jean Jacques Barre’s right-profile bust of Napoleon III. Coins from the French Republic era include a bust of Napoleon III with a bare head and an engraving of “Republique Francaise.” Those coins issued during the era of the second French Empire showcase Napoleon III with the Roman-era laurel wreath signifying imperial power and military success. These coins include an engraving of “Empire Francais.”

On the reverse of each gold coin is a wreath circle on the design field. Some coins feature the legend of “10 Francs” and a year of issue inside of that wreath, while others include the French coat of arms. Coins available here today have signs of wear and tear resulting from handling in circulation and their condition is referred to as “circulated” coins.