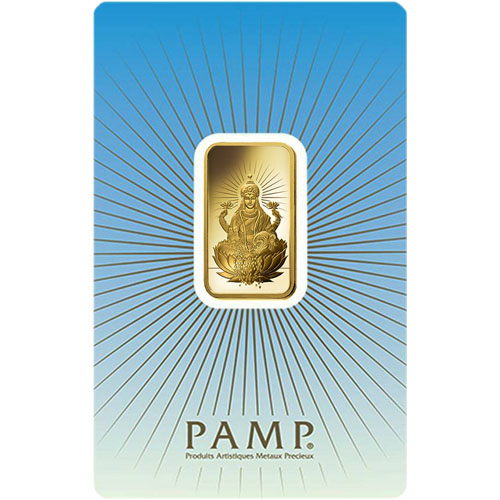 With 1.25 billion followers around the world today, Hinduism is the third-largest religion in the world today. Hinduism originated on the Indian subcontinent and is largely practiced in that region with Indian nationals in other countries around the world also following the practices of Hinduism. Right now, 10 Gram Gold PAMP Suisse Lakshmi Bars are available to purchase online at Silver.com.

Each of the 10 Gram Gold PAMP Suisse Lakshmi Bars comes in brand-new condition from PAMP Suisse. The gold bars available here are sealed inside of individual assay blistercards from the mint. The blistercard has a capsule at the center to hold the bar and an assay certificate built into the design of the card. The assay authenticates the gold bar’s weight, metal content, and purity, as well as its serial number and also features the signature of an assayer.

Lakshmi is one of the main goddesses from the Hindu religion. Vishnu is one of the primary deities in Hinduism and is the husband of Lakshmi. The goddess is said to be both the wife of Vishnu and the divine energy for the deity. Hindu has some 1.25 billion followers around the globe, the vast majority of whom reside on the Indian subcontinent. The religion is considered by many to be the oldest organized religion in the world.

On the obverse side of 10 Gram Gold PAMP Suisse Lakshmi Bars is a depiction of the goddess. Lakshmi is shown here in a seated position with two of her four arms holding up blooming flower petals. Lakshmi is shown in this design sitting inside of a large flower bloom with rays of sunshine emerging from behind her figure.

The reverse face of the 10 Gram Gold Lakshmi Bars features the PAMP Suisse logo. The well-known company logo is shown on this side with the markings of the bar’s weight, purity, and metal content. You will also find an assayer’s mark on this face of the bar with a unique serial number assigned. The serial numbers in this series are assigned in a one-letter, six-number code.

PAMP Suisse was founded in Ticino, Switzerland, in 1977. The refinery has grown into one of the largest producers of gold, silver, platinum, and palladium precious metals. The mint issues a wide range of minted ingots that include these bars from the Religious Series, as well as the Rosa and Fortuna collections.

If you have any questions, Silver.com customer service is here to help. Please call us at 888-989-7223, chat with us live online, or email us directly.