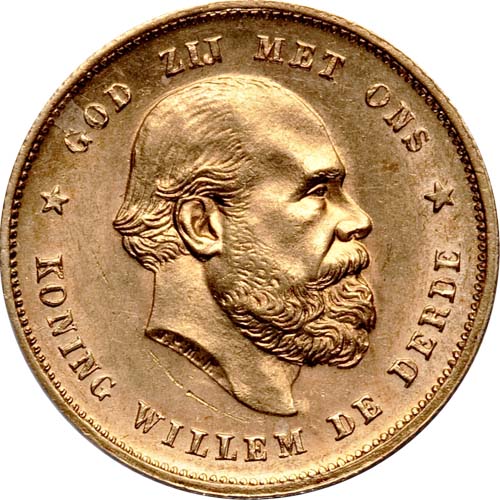 The Dutch guilder was previously the fiat currency of the Netherlands, issued for the County of Holland as early as 1378 and earning international recognition as a Dutch gold coin in 1517. The largest production range came between the 17th century and 1933, with the so-called Gold Kings issued from 1818 to 1890 with a 10 Guilder denomination. Right now, 10 Guilders Gold Coins are available to purchase online at Silver.com.

Each 10 Guilders Gold Coin in this product listing is available with protective plastic packaging. Though the 10 Guilders denomination was issued from 1818 to 1933, these coins come from the Gold Kings coinage which was available only between 1818 and 1890. These coins are available in XF, or extremely fine, condition. The XF condition indicates the presence of light wear only on the high points and may contain some traces of original mint luster.

Upon his abdication, Willem II took over from his father and reigned for a short period until his own death. The date mark on 10 Guilders Gold Coins in his reign stretch from 1840 to 1848, with no coins issued during his year of death in 1849 bearing his effigy. Coins from 1849 until 1890 bear the effigy of King Willem III, who ruled from his father’s death until his own in 1890.

The reverse of all 10 Guilders Gold Coins in this listing features the crowned shield of the Kingdom of Netherlands. The crowned arms include the royal shield with the rampant lion and sword, as well as a crown set atop the shield.

If you have any questions about these gold coins for sale, please feel free to reach out to Silver.com. Our customer service team is available to you at 888-989-7223, online using our live chat, and via our email address.