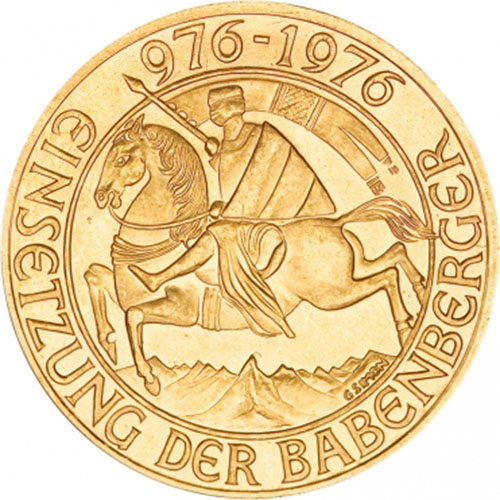 From 1925 through 1999, the official national currency of Austria was the Austrian shilling. Issued through most of the 20th century, with the exception of World War II’s impact on the nation (1938-1945), the currency was recognized around the world. One denomination never struck by the Austrian Mint was the 1000 Shilling gold coin. Today, 1000 Shilling Gold Austrian Coins are available to you online at Silver.com.

In 1976, the Austrian Mint issued these first-ever 1000 Shilling Gold Austrian Coins to commemorate 1,000 years since the foundation of the Babenberg Dynasty and the Austrian Empire. The coins feature commemorative date marks of 976, the origin of the House of Babenberg, and 1976 to mark 1,000 years.

The 1000 Shilling Gold Austrian Coins were issued by the Austrian Mint with designs from two different individuals. Gertrude Simon created the image of the Seal of Friedrich II, while Martha Coufal-Hartl developed the Imperial Austrian Eagle shown on the coin’s obverse side.

On the obverse of the 1000 Shilling Gold Austrian Coin is the image of the official seal of the Austrian Empire. Known as the Imperial Eagle of Austria, the bird wears the national shield of Austria and clutches two items in its talons. In one talon there is a hammer and in the other, there is a sickle. Engravings on this face include “Republik Osterreich,” the German-language spelling for Austrian Republic, and the face value of “1000 Shilling.”

The reverse of the 1000 Shilling Gold Austrian Coins features the seal of Friedrich II. The Duke of Austria and Duke of Styria, he was the last ruling member from the House of Babenberg. The seal features a knight on horseback wielding a spear and carrying a pennant. On this face, you’ll find engravings of the commemorative dates “976 – 1976,” and the German-language inscription of the Babenberg Dynasty as “Einsetzung der Babenberger.”

Please feel free to reach out to Silver.com if you have any questions when buying gold. You can reach out to our customer service team at 888-989-7223, chat with us live online, or send us an email with your inquiries.