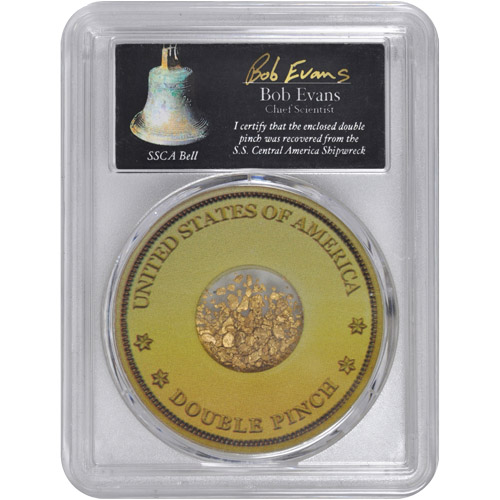 The Panic of 1857 in North America was set off by the sinking of a single ship in September of that year. The SS Central America had docked near the Isthmus of Panama to take on board 30,000 pounds of US gold coins and gold ingots that had sailed from San Francisco to the west coast of Panama. Just days after leaving Panama, the SS Central America sank. Today, 1857 SS Central America Gold Double Pinch is available to you online at Silver.com.

The SS Central America was carrying various loadouts of Gold US Eagle coins that had been minted on the west coast with gold from the California Gold Rush. These coins, and a range of different sizes of gold ingots, were destined for major American banks in New York City. However, the ship would never reach its destination.

As the SS Central America set sail from Colon, Panama, on September 3, 1857, it was to set a course for New York City. The ship made a brief port call in Havana, Cuba, before turning north up the coast of Florida and the Carolinas. On September 9, 1857, the ship ran into a Category 2 hurricane and was sunk off the coast of the Carolinas. For nearly 150 years, the gold coins and nuggets sat on the bottom of the Atlantic Ocean.

These 1857 SS Central America Gold Double Pinch are so-named in honor of a tradition from saloons and speakeasies in the American West. Miners who had little more than raw gold to spend on booze at the end of a hard day of work seeking out treasure would often pay for a double shot of liquor with a double pinch of raw gold flakes.

Please contact Silver.com with any questions about gold for sale. You can call us at 888-989-7223, chat with us live online, or simply send us an email with your inquiries.