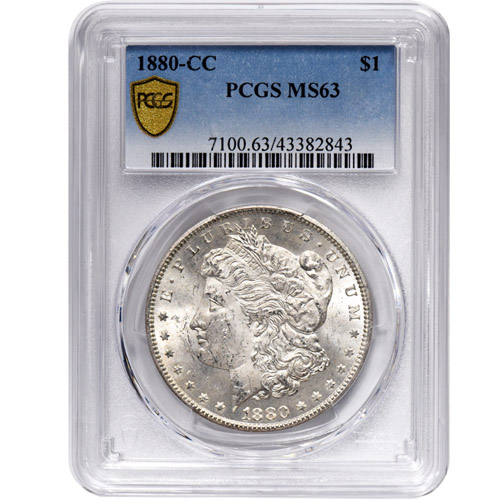 In 1880, the Silver Morgan Dollar was in just its third year of production at the United States Mint, and a total of four branch mints were striking the coins in the millions each year. At this point, the Carson City Mint was one of three that had issue the coins every year to date, and it had, by far, the lowest mintage figures in the series. Right now, 1880-CC Silver Morgan Dollars are available to purchase online at Silver.com in certified condition.

Each 1880-CC Silver Morgan Dollar listed here comes with an MS63 grade and a protective slab. Coins in Mint State 63 condition exhibit impaired mint luster with the potential for several small contact marks and/or a few heavier contact marks. These marks may or may not be located in the primary focal fields. It is also possible to find light hairlines visible without the aid of magnification.

The obverse side of the 1880-CC Silver Morgan Dollar comes with an effigy of Lady Liberty. This design was created by George T. Morgan and depicts Liberty in left-profile relief with a Phrygian cap on her head, as well as a coronet crown and a laurel wreath.

On the reverse field of 1880-CC Silver Morgan Dollar Coins, you will find a depiction of the heraldic eagle of the United States. First designed in 1794, this version was modified by George T. Morgan and features the front-facing bald eagle with the arrows of war and the olive branch of peace. There is also a wreath framing the eagle on this side and a CC date mark from the Carson City Mint.