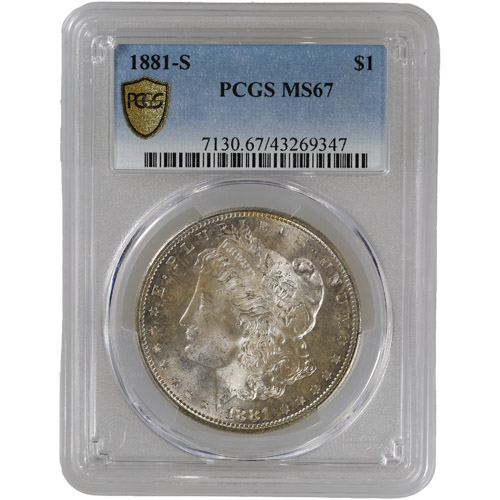 Introduced in 1878, the debut of the Silver Morgan Dollar brought to an end a five-year lapse in the production of silver dollars in the United States. The Seated Liberty Dollar had been halted in 1873 after the passage of a coin act in Congress that halted free silver coining in the United States. When the Silver Morgan Dollars when into production, the Philadelphia Mint and San Francisco Mint were two of the first three branch mints to issue the coins. Now, 1881-S Silver Morgan Dollars are available to you for purchase online at Silver.com with PCGS certification.

A total of five US Mint branch facilities contributed to the production of the Silver Morgan Dollars. The coins were issued starting in 1878 with production at the Philadelphia Mint, San Francisco Mint, and the Carson City Mint. In 1879, the New Orleans Mint began production of the coins. The last mint to contribute was the Denver Mint, which issued the coins only in 1921.

The obverse side of 1881-S Silver Morgan Dollars comes with a left-profile portrait of Liberty. In this design, she wears a Phrygian cap, coronet crown, and a laurel wreath on her head. There are 13 stars around the edge of the design field and inscriptions of E PLURIBUS UNUM and the date mark.

On the reverse field of 1881-S Silver Morgans is a 19th-century version of the heraldic eagle of the United States. The design comes from George T. Morgan and shows a front-facing bald eagle with the arrows of war and the olive branch of peace in its talons.

These 1881-S Silver Morgan Dollar Coins are certified Mint State 67 by the PCGS. Coins in this condition showcase original mint luster with a normal strike for the date. Each coin may have three to four small contact marks, one or two small hairlines, and/or one or two minor scuffs.