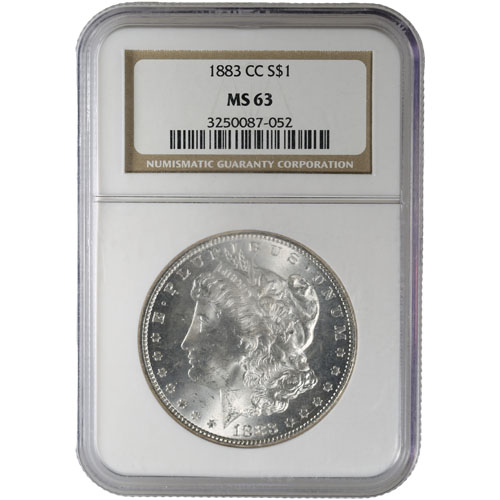 The Carson City Mint was established in 1863 to refine silver from mines in Nevada and the surrounding region into coins for circulation use. The mint began coining operations in 1870 and operated annually until 1885. After a hiatus in coining from 1886 to 1888, the mint resumed coining from 1889 until its permanent closure in 1893.

All of the 1883-CC Silver Morgan Dollars available here come with NGC certification. Coins in Mint State 63 condition have slight impairment to the mint luster, with the potential for contact marks, hairlines, and scuffs. Generally speaking, the coins have numerous, scattered contact marks and a few heavier marks. Hairlines might be visible without magnification and minor scuffs may be present.

On the obverse of 1883-CC Morgan Dollars is a portrait of Lady Liberty in left-profile relief. The design was created in 1878 by George T. Morgan and features the female personification wearing a Phrygian cap, coronet crown, and a laurel wreath.

The reverse side of the 1883-CC Silver Morgan Dollars comes with an image of the heraldic eagle of the United States. The heraldic eagle design has featured on countless denominations of US coinage, but this particular version was created for this series in 1878 by Morgan and features a front-facing bald eagle with the arrows of war and the olive branch of peace.

Please contact Silver.com if you have any questions. Our team is available at 888-989-7223, online using our live chat, and via our email address.