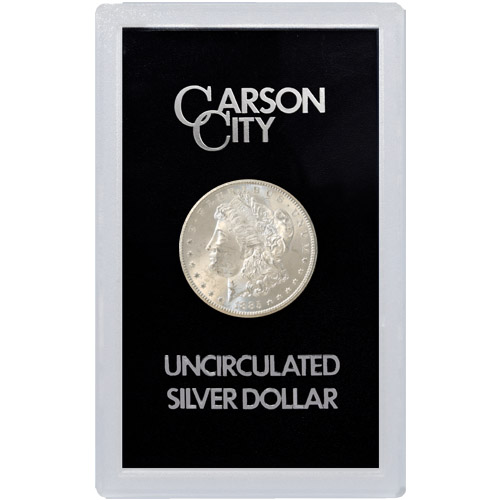 Each 1885-CC Silver Morgan Dollar available here at Silver.com comes with the packaging the Government Services Administration used when selling the coins in public auctions during the 1970s and early 1980s. The GSA packaged the coins individually in hard plastic holders following an audit of the more than $3 million in Silver Morgan Dollars found in US Treasury vaults in the 1960s.

Among the distinctions the Carson City Mint holds as a producer of Silver Morgan Dollars, it stands as one of the three original producers from 1878 and the only mint to strike the coins in two different periods: 1878-1885 and 1889-1893. The Carson City Mint is also notable for using locally-sourced silver in the coining of Silver Morgan Dollars and for producing the lowest volume of coins each year.

Liberty is found on the obverse side of 1885-CC Silver Morgan Dollars from the US Mint. This design was created by George T. Morgan with Anna Willess Williams sitting for portrait sessions with him as an inspiration for the Liberty design.

The heraldic eagle of the United States is depicted in the reverse design of 1885-CC Silver Morgan Dollars. Also developed by Morgan, the design shows the bald eagle with the arrows of war and the olive branch of peace in its talons. The bird is set in front-facing relief.

If you have questions, please feel free to ask. Silver.com customer service is available at 888-989-7223, online via our live chat, and using our email address.