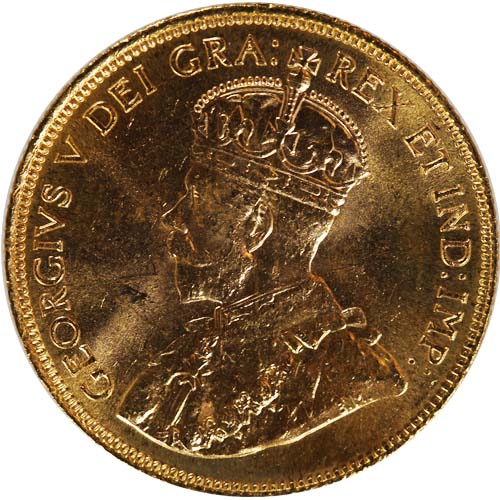 The gold coins of the Canadian Reserve that were struck between 1912 and 1914 were intended for circulation. However, most of the coins ended up sitting in cloth bags in bank vaults for nearly 100 years before actually being released to collectors starting in 2012. These gold coins are rich in Canadian history. Now, 1914 Gold $10 Canadian Reserve Coins are available to you for purchase online at Silver.com.

The coins of the Gold Canadian Reserve issue from 1912 to 1914 are collectively known as the Bank of Canada hoard. The discovery of thousands of these specimens sitting in the vaults of the Bank of Canada in the late-20th century was a major gold discovery that promised to deliver something truly special to gold collectors.

The Royal Canadian Mint designed and struck the coins between 1912 and 1914, but many of the coins were never released into circulation. With the onset of World War I in 1914, the Canadian government tucked away the gold in its reserves. At first, the coins were held in the secure vaults of various Canadian banks. Over time, the coins were moved to the Department of Finance, and finally to the Bank of Canada.

The obverse side of 1914 Gold $10 Canadian Reserve Coins have a depiction of King George V. Crowned the King of England and the British Dominions in 1910, this left-profile portrait of George V is the first of his reign to feature on British and Canadian coins. The portrait shows King George V with the Imperial State Crown on his head.

On the reverse of 1914 Gold $10 Canadian Reserve Coins is a depiction of what was the default first Canadian coat of arms. The shield shown here depicts the individual coat of arms for the four provinces that formed the Dominion of Canada in 1867. This quartered shield effigy was adopted a year later in 1868.

The history of the Bank of Canada hoard is one that mirrors the GSA Hoard of Morgan Dollars in the United States. These gold coins were largely lost to history. After being rediscovered, the Royal Canadian Mint selected 30,000 of the coins for release to collectors before melting down the remainder to refine into other gold products.

1914 Gold $10 Canadian Reserve Coins listed here come with plastic flips. The coins are in Very Good+ condition and have medium-to-heavy wear with some details of the designs and inscriptions still visible.

Silver.com customer service is available to you at 888-989-7223. Alternatively, you can contact us online through our live chat and email address features.