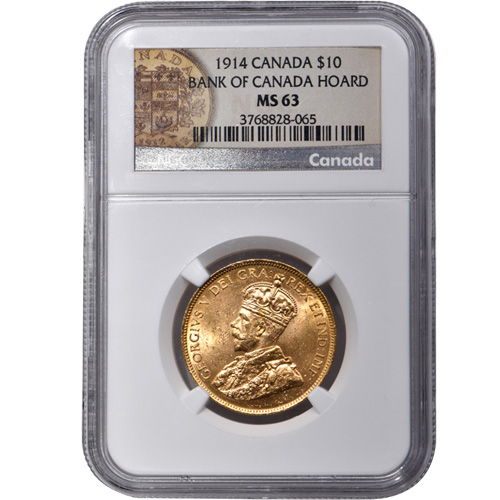 The coins of the Bank of Canada hoard represented one of the greatest gold finds of the late 20th century. The coins were struck between 1912 and 1914, but most of the coins were never released for circulation use because of the outbreak of World War I in Europe. Only 30,000 of these coins were ever issued to modern buyers in the early 21st century. Today, 1914 $10 Gold Canadian Reserve Coins with certification are available to you online at Silver.com.

All of these 1914 $10 Gold Canadian Reserve Coins are available to you for purchase in Mint State 63 condition. Coins in this condition will have slightly impaired mint luster with a variety of other possible flaws. These include, but do not necessarily always include, numerous small contact marks, a few scattered heavier marks, and small hairlines that are visible without magnification.

Silver.com offers these coins with the potential for two different labels. Each one of the coins is a Gold Canadian Reserve Coin with a $10 (CAD) face value, a 1914 date, and a Mint State 63 certification. We cannot, however, guarantee whether the PCGS or NGC graded the specific coin you receive. This will be determined at random and you may receive coins with matching labels when you buy multiples.

On the obverse of 1914 $10 Gold Canadian Reserve Coins is an effigy of King George V. His Majesty is shown in left-profile relief wearing the Imperial State Crown on his head. This design is one of the earliest effigies of his reign as he ascended the throne of England in 1910 and would reign until his death in 1936.

The reverse side of 1914 Gold Canadian Reserve Coins features one of the earliest versions of a Canadian coat of arms. It is based on the first coat of arms of the Dominion of Canada and features the combined coat of arms for the four provinces that formed the Dominion after confederation.

Please feel free to contact Silver.com with any questions when buying gold. You can call us on the phone at 888-989-7223, chat with us live online, or simply send us an email with your inquiries.