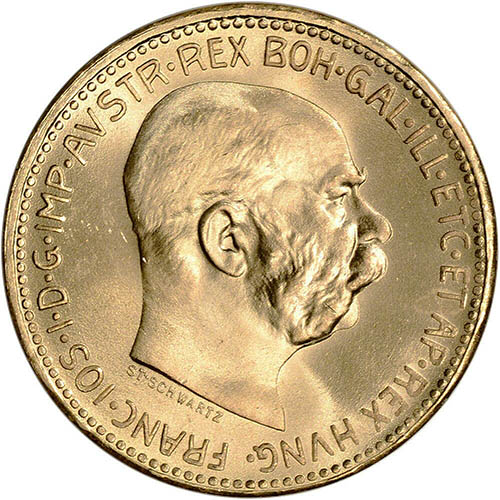 Any quantity available for $18.99 per coin over spot!

There are many ways for gold investors and collectors to buy gold. Modern gold bullion coins and gold bars are one option, as are previously circulated coins and unique restrikes issued by sovereign mints. The 20 Corona Gold Austrian Coin was once one of Europe’s most prominent denominations. Now, 1915 20 Corona Gold Austrian Coins from a restrike release are available for you to purchase online at Silver.com.

In 1892, the empire adopted the gold standard and the Austrian Mint began to produce gold circulation coins. The 20 Corona Gold Austrian Coin became the most popular denomination within the program and was widely issued across the empire, eventually becoming one of the most prominent coins in continental Europe during the early 20th century.

On the obverse of all 20 Corona Gold Austrian Coins is an effigy of the reigning monarch. For almost the entirety of its history, the Austro-Hungarian Empire was ruled by Emperor Franz Joseph I. First the Emperor of Austria beginning in 1848, Joseph I would later become the dual monarch of the empire when it was formed in 1867 and would reign until his death in 1916, just two years before the empire was defeated in World War I and broken up into several smaller states after.

The reverse side of 1915 20 Corona Gold Austrian Coins includes the coat of arms of the Austro-Hungarian Empire. The seal is based on that of the House of Hapsburg and features a double-headed eagle behind the heraldic shield with a crown above the heads.

These 1915 20 Corona Gold Austrian Coins are restrikes from the Austrian Mint with a 1915 date mark. The coins are available in protective flips and come with an About Uncirculated-plus grade. Coins in this condition often show only the slightest hints of wear and the highest legends and devices.