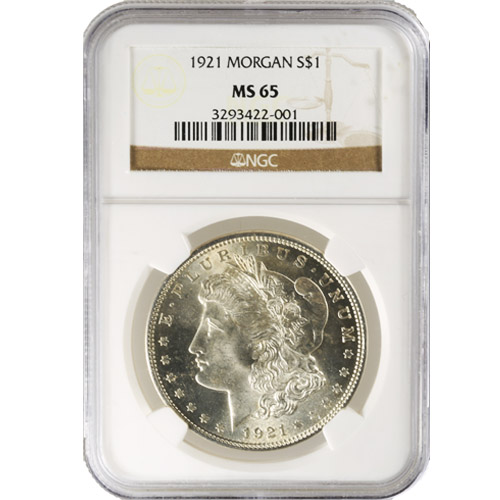 The release of the Silver Morgan Dollars in 1921 marked a return of silver dollar coining following the end of the original release of these coins in 1904. The US introduced various legislations regarding silver coining and silver purchasing by the Treasury in the late-19th and early-20th centuries. The result was an end to silver coining in 1904, with resumed purchasing and coining after World War I. As such, the Silver Morgan Dollars were reintroduced in 1921. The 1921 release, though only issued through December 1921 with the Morgan design, was the highest minted in the series. A total of more than 86 million 1921 Morgans were issued, including more than 20 million each with Denver Mint “D” mint marks and San Francisco Mint “S” mint marks.

All of these 1921 Silver Morgan Dollars come with a Mint State 65 certification from the NGC. Coins in this condition have a high-quality luster that remains attractive for the age of the coin. You may notice a few small scattered contact marks or two larger contact marks, one or two hairline patches, and possibly even light scuff marks.

On the obverse of 1921 Silver Morgan Dollars is an effigy of Lady Liberty. This design was created with Anna Willess Williams as the model for Liberty. Williams was a teacher and well-known philosophical writer in the 19th century.

The reverse side of 1921 Silver Morgan Dollar Coins comes with a depiction of the heraldic eagle of the United States. This version of the seal was created by Morgan for this release. It features a bald eagle in front-facing relief with the olive branch of peace and arrows of war in its talons. Notably, this design lacks a US national shield and the cluster of 13 stars typical in other heraldic eagle designs.

Please contact Silver.com with your questions. Our customer service team is available on the phone at 888-989-7223, online through our live chat, and using our email address.