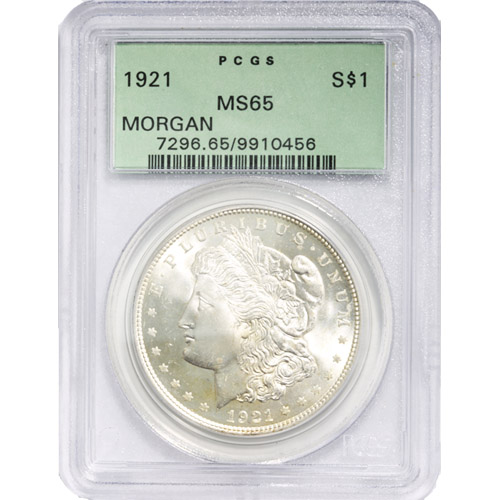 During the 20th century, the United States only issued three designs for the silver dollar coins. The first and most common of these was the Silver Morgan Dollars. Designed in 1878 by George T. Morgan, the Morgan Dollars were produced from 1878 to 1904, and again one final time in 1921 when silver dollar coining resumed in the United States following World War I. Now, 1921 Silver Morgan Dollars are available to you for purchase online at Silver.com in certified condition.

Silver dollar coining in the United States was very complicated following the passing of the Coinage Act of 1873. This act ended the free coining of silver in the US, canceled the Seated Liberty Dollar design, and resulted in a five-year hiatus in silver dollar coining in the US. The Bland-Allison Act was passed in 1878 requiring the US Mint to purchase $2 to $4 million worth of silver each month to coin into dollars.

The US Mint used this silver to introduce and coin the Silver Morgan Dollar. This lasted until 1890 when the act was repealed. The Sherman Silver Purchase Act was then passed, requiring the purchase of 4.5 million ounces of silver monthly to coin silver dollars. That act was repealed in 1893. The silver purchased during that period lasted the US Mint through until 1904. In between, Congress stipulated that the US Mint use the silver purchased during the Sherman Silver Purchase Act to continue coining silver dollars until the supply was depleted, which occurred in 1904.

1921 Silver Morgan Dollars were struck as a result of the Pittman Act of 1918 that required the melting and re-coining of millions of silver dollars. Lady Liberty returned to the obverse of the 1921 Silver Morgan Dollars released in the aftermath of the Pittman Act’s passage. George T. Morgan’s heraldic eagle was once again featured on the reverse of the coins.

These 1921 Silver Morgan Dollars have a Mint State 65 certification from the PCGS. Coins in this condition showcase high-quality luster, a few small contact marks scattered throughout or two larger contact marks, as well as one or two small hairlines with light scuff marks only on the highest design points.

Silver.com customer service is available to assist you at 888-989-7223. Alternatively, you can contact us on the web using our live chat and email address features.