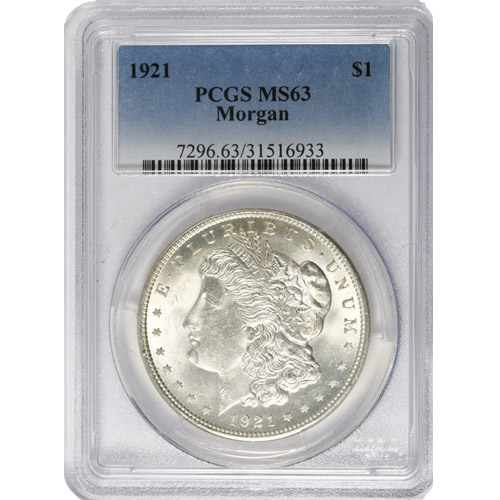 Available from 1878 to 1904, the Silver Morgan Dollar was the last long-running silver dollar design from the US Mint. The Morgan Dollar has a unique distinction among American coins for having appeared in two different runs, although the final production run lasted just over 11 months in 1921. Now, certified 1921 Silver Morgan Dollars are available to you for purchase online at Silver.com.

The United States Mint has had three major silver dollar designs throughout the history of circulating silver production, with a number of shorter-lived designs. The very first images were those of Flowing Hair Liberty and the Draped Bust Liberty coins appearing in 1794-1795 and 1795-1804, respectively.

Regular coining of silver dollars did not take place between 1804 and 1836 when the US Mint introduced the Seated Liberty design. Produced for 37 years, the Seated Liberty design was used the longest. Its placement, the Morgan Dollar design, is the second-longest design in the series, having been struck on the coins from 1878 to 1904 and again in this one-time 1921 release.

On the obverse of 1921 Silver Morgan Dollars is an effigy of Liberty in left-profile relief. This design of Liberty was created by George T. Morgan in 1878 and featured on the obverse of the coins throughout the production run of the coins. The portrait was typical of designs inspired by the Classical Era and features Liberty with both the Phrygian cap on her head and a coronet crown in her hair.

These 1921 Silver Morgan Dollars earned certification from the PCGS. Each coin has a Mint State 63 designation indicating slightly impaired mint luster. Coins of this grade level have varying signs and levels of possible flaws. The most common are numerous small contact marks and a handful of scattered heavier marks. Other possible flaws include small hairlines and a few heavier scuffs.