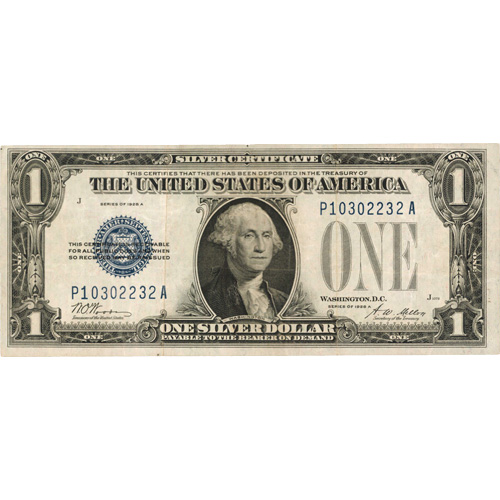 The legal tender notes of the US Silver Certificate Series were issued from 1878 to 1964, with the Treasury accepting the notes for redemption of silver through 1968. Until mid-1967, Americans could redeem Silver Certificates for the face value in silver dollars. In the final year of availability, the notes were only redeemable for raw silver bullion. Now, Very Fine+ 1928 $1 Silver Certificate Notes are available to you for purchase online at Silver.com.

The history of the US Silver Certificate is diverse across the large-sized and small-sized note collections. From 1878 to 1927, the notes were produced in a large-sized format that was affectionately known to Americans as the horse blanket because many Americans would joke that the notes could cover a horse’s back. Additionally, these notes were signed by the Register of the United States and the Treasurer of the United States.

In 1928, the Silver Certificates were reformatted to a smaller size that would be more familiar to modern Americans. The notes were not only smaller, but the signature combinations on the notes were now different as well. The small-sized notes were signed by the Treasurer of the United States and the Secretary of the Treasury.

The obverse side of 1928 $1 Silver Certificates features a three-quarter profile portrait of President George Washington, the first President of the United States. This effigy of Washington debuted in 1923 on the final large-sized Silver Certificate. The seal and serial numbers on this face are printed in blue ink.

These 1928 $1 Silver Certificate Notes are available with individual currency sleeves and arrive in Very Fine+ condition. Notes in this condition will show common signs of circulation use such as fold lines, mild soiling, and rounded edges. However, each note will have paper that is still crisp and relatively clean. The 1928 Series of $1 Silver Certificates had six versions, each one representing a different combination of Treasurer and Secretary of the Treasury signatures. You can tell the difference in each one by the printed “Series of 1928” on the obverse. Beyond the initial release, the additional five series issues of 1928 designs include A, B, C, D, and E. You may get matching notes if you buy more than one.

Silver.com customer service can assist you at 888-989-7223. Alternatively, you can chat with us live online or email us directly.